Daniel Jacobs had his career interrupted by life-threatening bone cancer, but he fought his way back to become a 160-pound world champion. Read Bio 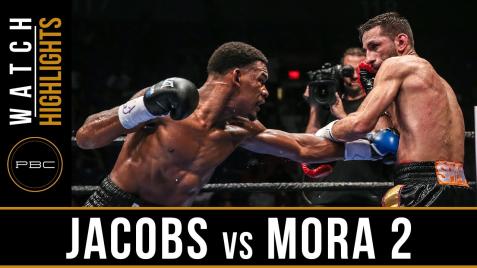 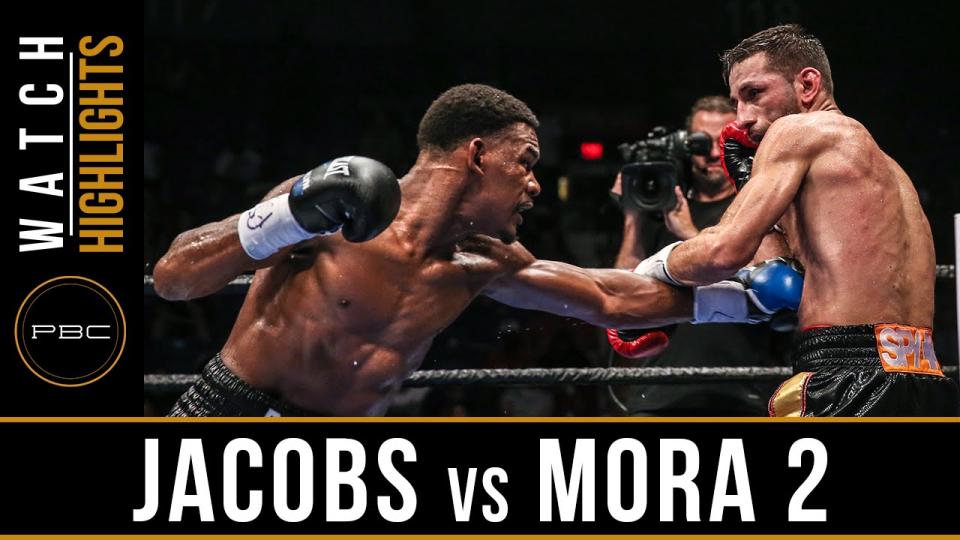 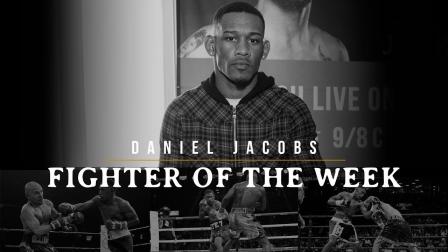 Fighter Of The Week: Daniel Jacobs click here to get video transcript 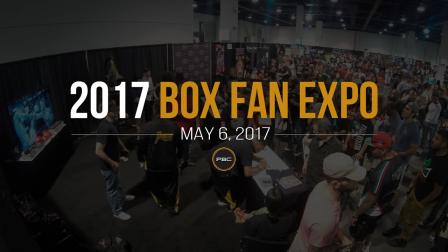 Pair of stablemates and former sparring partners know each other well heading into Saturday night's IBF 160-pound title fight, but Jacobs says his championship experience will be the key difference.

Daniel Jacobs keeps beating the odds, thriving in the ring

Former middleweight world champion and cancer survivor has overcame everything thrown at him in and out of the ring—plans on doing the same thing this Saturday night against unbeaten Polish contender Maciej Sulecki in their WBA 160-pound title elimination bout at Barclays Center.

Former middleweight world champion discusses his tough loss to Gennady Golovkin and breaks down his Nov. 11 bout against Luis Arias.

Growing up in the tough Brooklyn, New York, neighborhood of Brownsville, Daniel Jacobs was groomed to be a fighter. In May 2011, he was diagnosed with osteosarcoma, a life-threatening form of bone cancer, which rendered him unable to walk at one point. But the "Miracle Man” fought his way back to become the first cancer survivor to win a world boxing title.

Jacobs won so much as a youth boxer growing up in Brooklyn that he earned the nickname the “Golden Child.”

While his winning ways continued throughout his professional career, his nicknamed changed to “Miracle Man” to depict that the biggest victory of his life actually came outside the ring.

In 2011, Jacobs was informed that he had a rare form of bone cancer that partially paralyzed him. Doctors told him he would never walk again, let alone fight.

Unsatisfied with their assessment, Jacobs proved both the medical and boxing world wrong when three years later he was hoisting a world championship belt over his head in his hometown arena Barclays Center—becoming the first-ever cancer-surviving champion.

As an elementary school student, Jacobs turned to boxing after one of his classmates began bullying him on the playground.

After getting into trouble at school for fighting the bully, Jacobs learned his tormenter was training at a boxing gym, so he decided to pick up the gloves and settle the score there.

In just his second sparring session, Jacobs beat up the bully—who never bothered him again—and in the process fell in love with boxing.

Jacobs quickly found success as an amateur fighter in New York, winning the national Golden Gloves title at both 147 and 160 pounds, and compiling a record of 137-7 as he earned the nickname of “Golden Child.”

He fell just short of his bid for the 2008 U.S. Olympic team, though, when he lost in the finals of the Olympic trials.

Shining under the bright lights

Jacobs made his pro debut in Las Vegas on December 8, 2007, gaining a first-round TKO of Jose Jesus Hurtado.

Less than two years after his debut, the unbeaten Jacobs won a 10-round unanimous decision over Ishe Smith in Houston.

The victory improved Jacobs’ record to 18-0, with five of the wins coming in 2009, and he was named prospect of the year by ESPN.com.

Jacobs continued his climb up the 160-pound ranks in May 2010, knocking down Juan Astorga four times in less than two rounds before the referee stopped the fight.

Just when everything seemed to be going right for Jacobs, though, adversity knocked him back of couple of steps.

A week before his July 2010 title fight in Las Vegas against Dmitry Pirog, Jacob’s grandmother, Cordelia Jacobs, who helped raise him, died of lung cancer.

Fighting with a heavy heart, Jacobs was stopped in the fifth round, giving him his first professional defeat.

The loss of a loved one and subsequent loss in the ring tested Jacobs, who would soon take on the biggest fight of his life.

Winning the battle against cancer

What began as an opportunity to give back to U.S. troops during a USO tour in 2011 quickly became a living nightmare.

Jacobs was in Iraq when he felt a sharp pain in his legs. The pain persisted, forcing Jacobs to head back to the United States.

His situation grew worse, leaving the fighter unable to walk.

Doctors soon discovered that Jacobs had osteosarcoma, a rare and aggressive form of bone cancer.

A walnut-sized tumor had actually wrapped itself around the fighter’s spine, causing partial paralysis.

After undergoing dozens of radiation treatments and surgery to remove the tumor, Jacobs returned to the ring in October 2012 for the first time in 19 months.

In an inspiring effort, he knocked out Josh Luteran in the first round at Barclays Center in his hometown of Brooklyn.

“They told me I would never box or walk again,” Jacobs told the New York Daily News afterward. “I proved everyone wrong.”

Coming all the way back

While simply returning to the ring was a victory of monumental proportions for Jacobs, he still longed to become a world champion.

In early 2013, doctors told Jacobs, who had adopted the nickname “Miracle Man” because of his recovery, that he was free of cancer.

He followed up the good news in April by gaining a fourth-round TKO of Keenan Collins in Brooklyn, flooring his opponent twice in the final round.

After two more victories, Jacobs reached the top of the mountain at Barclays Center in August 2014, knocking down Jarrod Fletcher in the first round before finishing him off with a big right hand in Round 5 to win a 160-pound world title.

“It is a miracle. I'm just blessed to be able to perform and win this title in front of all of these Brooklynites,” Jacobs said afterward. “(While fighting cancer) my son, my baby boy, was my first priority. But getting back into the ring was my second motivation. Boxing taught me to have the mental strength to overcome anything. And that's what I did.”

Jacobs made his Premier Boxing Champions debut April 24, 2015, when he faced Caleb Truax at Chicago's UIC Pavilion in a fight televised on Spike TV.

It was a technical, defensive battle in the early rounds as Jacobs controlled the action with his superior footwork and precision punching.

Jacobs picked up the pace in the middle rounds and began to use his jab more to pepper the challenger while also switching to southpaw at times.

Jacobs scored a knockdown of Truax in the 12th round before finishing him off moments later, winning by TKO to stay unbeaten.

While Jacobs needed nearly all 12 rounds to put away Truax, he only required a combined 10 rounds to win his next three fights.

After trading first-round knockdowns with Sergio Mora on August 1, 2015, at Barclays Center in Brooklyn, Jacobs dropped the former 154-pound champion for a second time moments before the bell to end Round 2. When Mora was unable to continue fighting because of a broken ankle suffered on the knockdown, Jacobs was declared the winner.

Jacobs returned to Barclays Center on December 5 and put his world title on the line against another former champion: unbeaten Brooklyn rival Peter Quillin. Instead of the highly competitive fight most boxing fans and analysts expected, Jacobs barely broke a sweat as he overpowered Quillin and earned a stoppage in just 85 seconds.

Following the biggest victory of his career, Jacobs agreed to a rematch with Mora on September 9, 2016, in Reading, Pennsylvania. After a healthy amount of pre-fight trash talk, Jacobs ultimately let his fists do the talking in the ring, dropping Mora five times on his way to a seventh-round TKO.

Jacobs lost a narrow decision to unbeaten power-puncher Gennady Golovkin in March 2017, a championship fight that opened the eyes of many in the boxing world to just how skillful Jacobs is.

Golovkin dropped Jacobs in the fourth round, but GGG’s vaunted power never fully materialized as Jacobs kept him off balance by switching between southpaw and orthodox stances, ending the champion’s 23-fight stoppage streak that had spanned nine years.

"After the knockdown, I told him he'd have to kill me," Jacobs said. "When I got up, I thought, 'This is all he has?' There were many times during the fight I went toe-to-toe because I knew I could. I got back up, and I thought I won the fight."

Another Title Shot Vs A Stablemate

Having rebounded with consecutive unanimous decision victories over previously unbeaten fighters in Luis Arias and Maciej Sulecki in November 2017 and April 2018, Jacobs continued to add to his already impressive resume, winning a 12-round split decision over previously-unbeaten Ukrainian contender Sergiy Derevyanchenkoon at the Hulu Theater at Madison Square Garden in New York.

However, Jacobs fell short in his quest for another world title. In May 2019, he lost a unanimous decision to unified middleweight champion Canelo Alvarez at T-Mobile Arena in Las Vegas.

Jacobs returned to the win column with a fifth-round stoppage over Julio Cesar Chavez Jr. in December 2020. Then in November 2021, he outpointed Gabriel Rosado over rounds.

“They told me I would never box or walk again. I proved everyone wrong.”