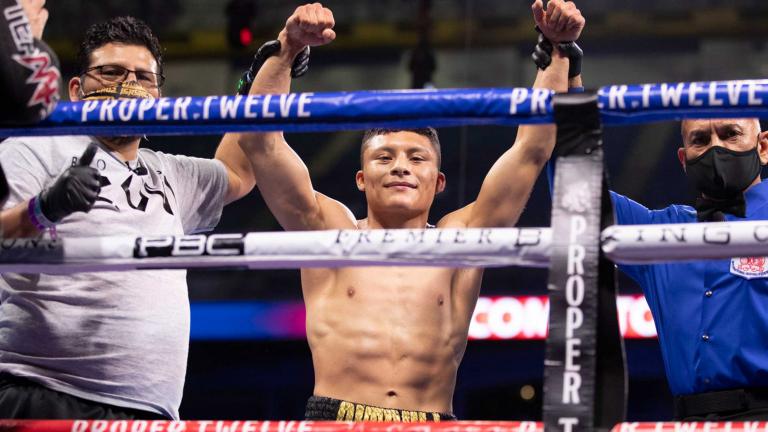 In the pay-per-view telecast opener, Mexico City’s Isaac Cruz (20-1-1, 15 KOs) wasted no time in getting the fans on their feet, scoring a stunning first-round knockout of Diego Magdaleno (32-4, 13 KOs) just 53 seconds into the night’s action. Watch the KO HERE.

The diminutive but powerful Cruz came out swinging immediately after hearing the opening bell, using his vicious uppercut to knock down the 34-year-old Magdaleno for the 11th time in his career inside of 30 seconds. Just 20 seconds after Magdaleno got to his feet, Cruz again unleashed a barrage of punches with Magdaleno against the ropes, finishing him off with back-to-back right uppercuts. In a short night of work, Cruz managed to land 21 of 31 punches, 20 of which were power shots.

With the win in the IBF Title Eliminator, Cruz puts himself in position to challenge lightweight world champion Teofimo Lopez down the line.

“The new Mike Tyson from Mexico was born tonight,” said the 22-year-old Cruz. “I thought it would go longer, but my natural instinct is always to go for it in the first round. I have confidence that I could win the world title right now. I thought it was a statement win. From now on, hopefully everyone will know my name and I’ll get the big fights. I would love a Teofimo Lopez fight. I’m very motivated right now. If he’s tough enough to take it, bring it on.”