The WBC World Middleweight Champion overcomes a stiff test with the finest performance of his career in the first of two headliners on SHOWTIME PPV.

It’s time to place Jermall Charlo among the very best in the sport, pound for pound.

In a thrilling battle between elite 160-pounders, Charlo outboxed and outbrawled a game Sergiy Derevyanchenko to retain his WBC World Middleweight title via 12-round unanimous decision.

The bout headlined the first three-fight card in a six-fight, first-of-its-kind boxing doubleheader on SHOWTIME pay-per-view.

It wasn’t easy – but no one has ever had an easy time versus Derevyanchenko. The Ukraine Olympian had come up short in two prior shots at a world title, both decision losses many believed should have gone in his favor.

Derevyanchenko, 34, 13-3, (10 KOs), was expected to be Charlo’s toughest test at middleweight, the best name on the champion’s ledger since he capped off his 154-pound world title run with a TKO win over Julian Williams in 2016.

But even those who saw the matchup as toss-up couldn’t have foreseen the riveting back and forth the two warriors displayed over 12 rounds. In the end, Charlo’s jab and power punching proved to be the difference. The former ranks among the best in the game. He began pumping it in the first, snapping Derevyanchenko’s head back repeatedly.

Houston, Texas’ Charlo, 30, 31-0 (22 KOs), continued to work his stick in the early rounds. It set up a hard right toward the end of the third that wobbled Derevyanchenko. It also bloodied both of his eyes; they were a purplish, swollen mess by fight’s end.

Yet none of that deterred Derevyanchenko from biting down, coming forward and taking the fight to the champion. Charlo struggled in the middle rounds as the challenger maneuvered him toward the ropes and outworked him.

Even in those frames where Derevyanchenko had success, Charlo had his moments, calmly landing his jab and an occasional hard shot in between Derevyanchenko’s flurries. In the eighth, one of those shots sent Derevyanchenko stumbling back as the bell to end the round sounded.

The fight appeared to be tightening up in the latter rounds as the pace slowed. Derevyanchenko was the busier fighter although it was Charlo who appeared to be landing the more effective punches. A hard right by Derevyanchenko in the 11th briefly got the champion’s attention—he then responded with a jab that landed with the force of a power shot.

Both fighters let it all hang in the 12th. Derevyanchenko held the advantage until the final seconds of the stanza, when he was rocked by a short uppercut on the inside. Again, the bell seemed to save Derevyanchenko from a possible knockdown but the damage was done. All three judges scored it in Charlo’s favor, by scores of 118-110, 117-111 and 116-112. 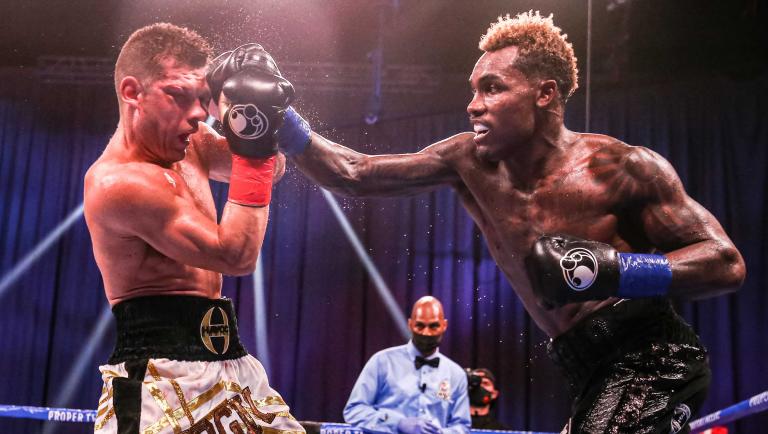