Castillo and Obara fight to a majority draw

In a fight loaded with action, Japanese powerhouse Keita Obara and Nicaraguan slugger Walter Castillo traded head shots for 12 rounds and fought to a majority draw in a matchup of 140-pound contenders.

After all, Castillo—a 27-year-old Nicaraguan—had knocked out five of his previous six opponents. Even more impressively, Japan’s Obara had stopped 14 men in 16 professional fights.

A gloriously chiseled 28-year-old boxer-puncher known for his mighty left hand—notably, the jab—Obara pounded Castillo from range through the middle rounds starting in the third. He also caused a nasty cut over Castillo’s right eye by the fourth; had the Nicaraguan boxer bleeding from his mouth by the sixth; and, by the 12th, bloodied Castillo’s right ear.

An evenly contested bout early on, Obara seized momentum midway through the contest. From the seventh round on, Obara morphed into a power puncher who rocked and wobbled Castillo into the ropes with combinations that caused sweat to spray from his rival’s head.

Castillo valiantly tried to turn the tables in the ninth and 10th, when he brought pressure and delivered punishment to Obara’s head and body along the ropes. Still, his opponent kept coming forward.

Prior to the start of the 11th round, the ringside doctor took a long look at the cavernous gash over Castillo’s eye prior. The fight was allowed to continue, though—a decision that turned out to be very much to Castillo’s benefit. 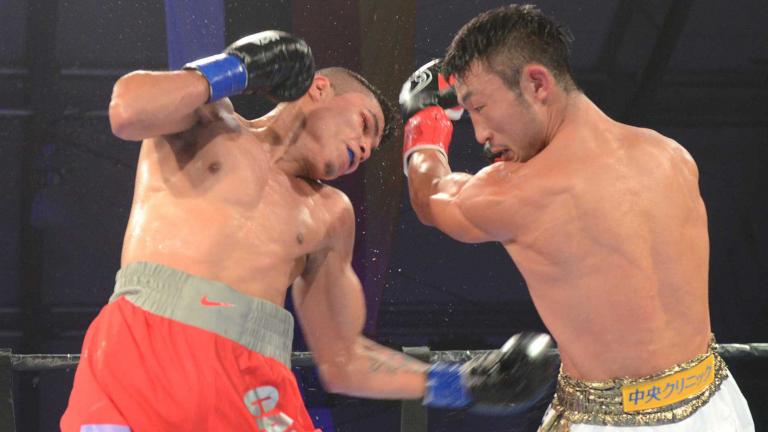 Walter Castillo lands one of the rare body shots thrown during his 140-pound clash against Keita Obara on Saturday in Miami, The action-packed fight was declared a majority draw. (Robert Sullivan/Premier Boxing Champions)

He’ll enter the ring with a heart as heavy as his hands.

Some things you don’t mind losing, like that beer gut, your virginity and the collected works of Seven Mary Three. Walter Castillo can add his April clash with highly regarded 140-pound prospect Amir Imam to the list.