Andy Ruiz was bred to fight by his father at early age. After accumulating a standout amateur record, “The Destroyer” turned pro at 19 to pursue his dream of become boxing’s first Heavyweight Champion of Mexican descent. Read Bio 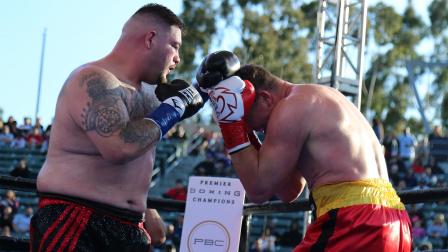 With barely a month left in the year, it’s time to look ahead at 2020 and all of its wonderful possibilities. So, without further ado, here is a wish-list of five PBC fights we hope to see in the new year.

Shining Under the Bright Lights of Pressure

Andy Ruiz Jr., Julian Williams and Jean Pascal all overcame heavy odds to win world titles in 2019. Here’s how they did it.

The accolades continue to pile up for the unified World Heavyweight Champion as he wins the ESPY Award for his title-winning, TKO victory over Anthony Joshua on June 1.

Andy Ruiz was bred to fight by his father at early age. After accumulating a standout amateur record, “The Destroyer” turned pro at 19 to pursue his dream of become boxing’s first Heavyweight Champion of Mexican descent.

Top-rated heavyweight contender Andy Ruiz Jr. was born to be a fighter—although he didn’t realize it at first. Baseball was young Andy’s passion. But his father, Andy Sr., had other plans. The elder Ruiz pushed his son into boxing, forcing him to give up baseball to study the sweet science daily.

Andy Sr.’s vision would come to fruition. Ruiz Jr. began his amateur career in Mexico, accumulating a 105-5 record and winning several national championships. Ruiz would go on to make it to the qualification stage for 2008 Olympics as part of the Mexican squad, although he ultimately fell short of making it the games.

Rather than continue his amateur career, Ruiz turned pro at 19. His first pro bout occurred in Tijuana, Mexico, on March 28, 2009. Ruiz would notch a first-round KO over Miguel Salvador Ramirez at the Plaza de Toros.

After two more bouts in Mexico (both wins), Ruiz made his U.S. pro debut on March 12, 2010, flattening Luke Vaughn in one round at the Gaylord Hotel in Grapevine, Texas.

STEPPING UP AND SHOWING OUT

Ruiz would continue to fight in the US until July 27, 2013. That was when the 19-0 boxer took his first major step up in competition, against 21-0 Joe Hanks at the Venetian Resort in Macao. It was no contest. Ruiz dominated, stopping Hanks in four rounds.

He returned to the ring that November, against once-touted prospect Tor Hamer, also at the Venetian Resort in Macao. The result was similar as well. After a slow start, Ruiz turned it on the third, punishing Hamer to the head and body. Hamer opted to remain on his stool prior to the start of the fourth round.

Ruiz returned to the U.S. in May 2017, stopping Manuel Quezada in two rounds at Selland Arena in Fresno, California. Another TKO win set up a showdown versus former world heavyweight champion Siarhei Liakhovich on December 20, 2014. Again, Ruiz dominated, winning a 10-round unanimous decision at Celebrity Theater in Phoenix, Arizona.

FIGHTING FOR A WORLD TITLE

Ruiz would win his next five bouts, climbing to the top of the rankings and setting the stage for a world title shot. On December 10, 2016, the now 29-0 boxer faced 21-0 Joseph Parker for the vacant WBO World Heavyweight Championship.

The bout took place at the Spark Arena in Parker’s native Auckland, New Zealand. It was a hotly contested battle for 12 rounds, with each fighter enjoying their fair share of moments.  Judge Salven Lagumbay had it 114-114, but judges Ramon Cerdan and Ingo Barrabas both scored it 115-113 for Parker, awarding Parker the victory and the world title.

On March 10, 2018, Ruiz returned to the ring with a first-round KO over Devin Vargas at StubHub Center in Carson, California. That July, he won a wide 10-round unanimous decision over fringe contender Kevin Johnson.

On April 2019, Ruiz made his Premier Boxing Champions debut at Dignity Health Sports Park in Carson, California, live on FOX and FOX Deportes. Ruiz turned in one of the finest performances of his career, stopping Alexander Dimitrenko after five one-sided rounds.

On June 1, 2019, Ruiz shocked the world, dropping unified world heavyweight champion Anthony Joshua four times en route to a seventh-round TKO victory in front of a stunned crowd at Madison Square Garden. Ruiz was the new heavyweight champion -- but in a December rematch, Joshua would regain those titles via 12-round unanimous decision.