Amir Khan’s lightning-fast hands have made the former 140-pound world champion one of the most electrifying fighters on the planet. Read Bio 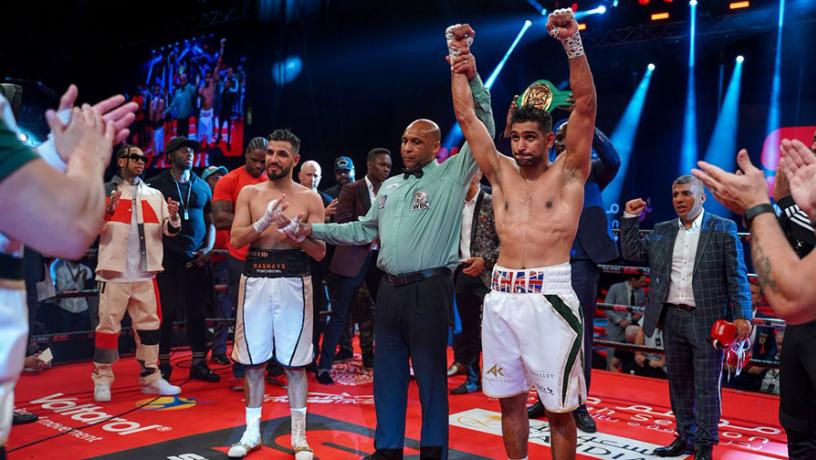 The former World Champion dropped Billy Dib twice and stopped him in the fourth round of their welterweight fight at King Abdullah Sports City in Jeddah, Saudi Arabia. 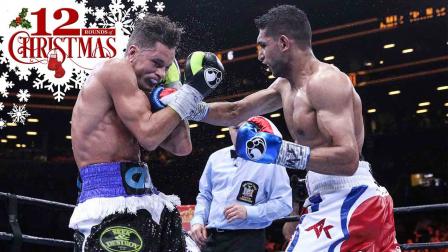 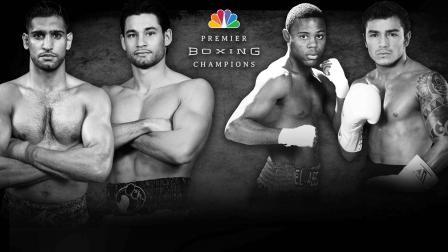 Khan vs Algieri preview: May 29, 2015 click here to get video transcript 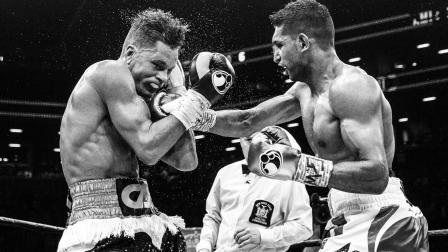 Khan vs Algieri full fight: May 29, 2015 click here to get video transcript

Presenting the 12 Rounds of Christmas: Round 8 (Amir Khan vs Chris Algieri)

It’s one of the basic tenets of boxing: A guy doesn't get knocked down a half-dozen times by an aging legend, then come back in his next bout and give a top contender all he can handle. Apparently, Chris Algieri was absent the day this theory was taught in Boxing 101.

Man on a Mission: Amir Khan is determined to prove he’s the king of the 147-pound division—and soon

Over the past two years, Amir Khan has fought three times in the 147-pound division, winning all three in rather convincing fashion. Now that he’s established himself at that weight, Khan is focused on one goal for 2016: He wants to own the division.

With Jake Gyllenhaal’s “Southpaw” coming out in theaters today, it’s the first of what promises to be a big run for boxing movies. Slated for later this year are the biopics “Bleed for This” about former two-division champion Vinny Pazienza and “Creed,” the latest in the deathless “Rocky” series. Next year brings the Roberto Duran biopic “Hands of Stone,” with Robert De Niro playing Duran’s trainer Ray Arcel.

An Olympic silver medalist for Great Britain at the age of 17, Amir Khan has continued his success as a professional, using his quick hands to stop opponents on both sides of the pond. He won a 140-pound world championship by the age of 22, and is now seeking to climb to the top of the 147-pound division.

Khan’s opponents don’t see it coming. Literally. When the British fighter lets his fists fly, his adversaries have a hard time seeing them, let alone getting out of the way.

That trademark hand speed has served Khan well since his amateur days, when he represented Great Britain in the 2004 Olympics at 17 years old and won a silver medal. And since turning pro, Khan hasn’t slowed down one bit.

A native of Bolton, Lancashire, with Pakistani ancestry, Khan began boxing competitively at age 11 and showed immediate talent for the sport. His younger brother, Haroon, is also a professional boxer.

Khan qualified for the 2004 Olympics, and was Britain’s lone boxing representative at the Athens Games.

He reached the finals of the 132-pound division before losing to Cuba’s Mario Kindelan, who also won Olympic gold in 2000.

Khan was Britain’s youngest Olympic boxer since Colin Jones in 1976, and in earning the silver medal became the youngest British fighter ever to win an Olympic medal.

Showing promise as a young pro

Khan made his professional debut in his hometown of Bolton in July 2005, gaining a first-round technical knockout of David Bailey.

The victory catapulted Khan right out of the gate, as he ran his record to 10-0 by the end of 2006, including six wins that year alone.

Khan pushed his record to 17-0 with a seventh-round TKO of Martin Kristjansen in April 2008, but split with his longtime trainer, Oliver Harrison, afterward.

Khan received a tough test in his next fight, against Irishman Michael Gomez in June 2008, and was knocked to the canvas in the second round.

Khan floored Gomez twice, though, and slugged his way to a fifth-round TKO to stay unbeaten.

After the Gomez fight, Khan hired Jorge Rubio as his trainer. Khan’s next opponent was Colombian Breidis Prescott, who entered their September 2008 fight with a record of 19-0 with 17 KOs.

Khan was favored in the fight, but Prescott was all over him from the outset, knocking Khan down twice in the first round and scoring a knockout in just 54 seconds.

Following the loss, Khan parted ways with Rubio as his trainer and replaced him with Freddie Roach. He then returned to the ring in December 2008, scoring a second-round TKO of Oisin Fagan in London.

The fighters clashed heads in the first round, opening a cut on Barrera’s forehead. The cut got progressively worse, and the doctor waved an end to the fight in the fifth round. Khan was ahead on all three scorecards at the time of the stoppage, giving him the victory.

On top of the world

Khan moved up from 135 pounds to challenge Andriy Kotelnik for his 140-pound world title, and the fighters met in the ring in Manchester in July 2009.

Despite the step up in weight, Khan dominated the fight and won a 12-round unanimous decision. At the age of 22, he became the third-youngest Brit to win a world championship.

Khan successfully defended his title five times over the next two years, starting with a first-round TKO of Dmitriy Salita. He then fought in the United States for the first time, gaining an 11th-round TKO of Paulie Malignaggi at New York’s Madison Square Garden in May 2010, before winning a 12-round unanimous decision over Marcos Maidana in Las Vegas in December 2010.

Khan continued his reign as champion in April 2011, when he won a sixth-round technical decision over Paul McCloskey, who was cut by an accidental headbutt earlier in the round.

Khan then gained a fifth-round KO of Zab Judah in Las Vegas in July 2011 to retain his title.

Khan suffered back-to-back defeats in world championship bouts after defeating Judah, first losing his title to Lamont Peterson in a 12-round split decision in Washington, D.C., in December 2011, and then suffering a fourth-round TKO at the hands of Danny Garcia in Las Vegas in July 2012.

After the loss to Garcia, Khan hired Virgil Hunter as his trainer and began his comeback in December 2012 with a 10th-round stoppage of Carlos Molina in Los Angeles.

The British star returned to the U.K. for his next fight, winning a 12-round unanimous decision over Julio Diaz in April 2013 in a 143-pound “catch-weight” bout.

Stepping up in weight to 147 pounds, Khan knocked down Luis Collazo three times in winning a 12-round unanimous decision in Las Vegas in May 2014.

He then easily outpointed Devon Alexander in Las Vegas in December 2014 to win another 12-round unanimous decision.

Stepping up to the challenge

Algieri was uncharacteristically aggressive from the opening bell, and relentlessly pressured Khan through the first half of the fight.

Khan gained the upper hand in the later rounds as he firmly held his ground and began answering Algieri's attack with some powerful shots of his own.