To say that Johann Duhaupas was a glutton for punishment would be to understate the buffet of abuse the man was force fed at the hand of Deontay Wilder. It was like an evening at the Golden Corral, but with Wilder’s fists in place of dubious deep-fried eats.

Still, Duhaupas fought valiantly and proved himself to have a bulletproof beard. Dude’s chin was so durable, it was if it was manufactured by Rubbermaid.

Throughout the fight, Duhaupas never stopped coming forward. Wilder inexplicably kept his hands low on too many occasions, allowing Duahaupas to find home with his jab.

When Wilder did have his gloves up, Duhaupas was able to land rights around his guard from time to time. It was enough for Duhaupas to do some serious damage to Wilder’s eye, which began to swell shut in Round 4.

Still, it was Duhaupas who absorbed much more punishment, his nose bleeding from the opening round.

Wilder rocked Duhaupas with blistering right hands the entire fight, unleashing a particularly blistering array of combos in Round 4 in the center of the ring as the Frenchman’s face became bashed into a bloody pulp.

Duhaupas did his best to weather the storm—or hurricane, rather—firing punches until the end. But after eating a series of uppercuts on the ropes, referee Jack Reiss stopped the fight in Round 11 to give Wilder a TKO victory. 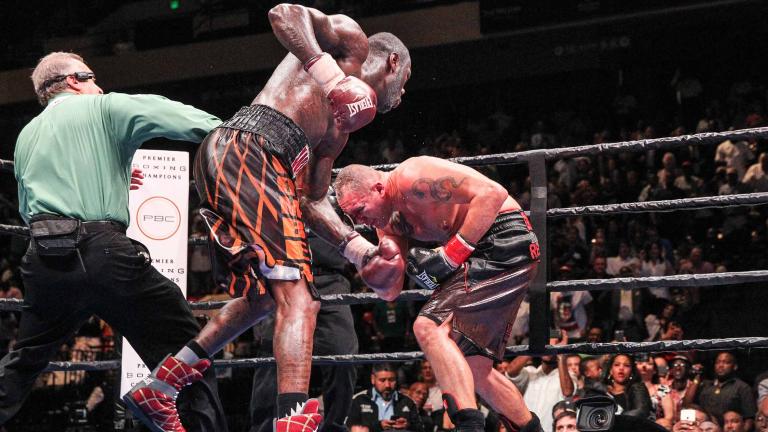 Referee Jack Reiss stopped the fight in Round 11 to give Wilder a TKO victory.

Presenting the 12 Rounds of Christmas: Round 5 (Deontay Wilder vs Johann Duhaupas)

Nearly three months have passed since Johann Duhaupas was on the receiving end of a savage 11-round beating from heavyweight champ Deontay Wilder. And yet we wouldn’t be at all surprised if the Frenchman’s ears are still ringing and his nose still bleeding.

Deontay Wilder eyes a quick return to the ring. But first, it's Sea-Doo time.

If you should happen upon a certain lake in Tuscaloosa, Alabama, in the coming days, don’t trip if you see a 6-foot-7-inch fellow being pulled behind a fast-moving watercraft, arms in place of ski ropes, like a human inner tube—a human inner tube that just turned a Frenchman’s grill into the facial equivalent of a crumpled milk carton.

Johann Duhaupas spent much of his Saturday night serving as the proverbial punching bag against Deontay Wilder, absorbing a mutilating array of shots from the heavyweight champ.