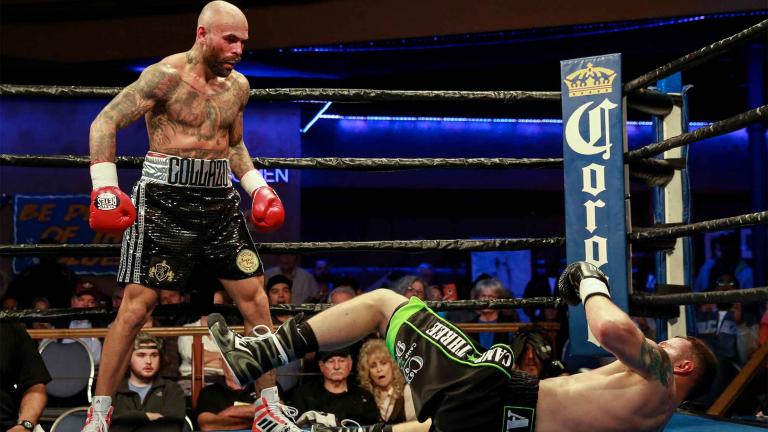 Luis Collazo gained a third-round knockdown of Sammy Vasquez Jr. before scoring a knockout in Round 6. (Ryan Greene/Premier Boxing Champions)

Collazo made a bid for Knockout of the Year with a sixth-round KO of Vasquez in the main event of a PBC on FS1 card.

After knocking down Vasquez with a right hook to the head in Round 3, Collazo landed the same shot in Round 6 that left “The Sergeant” lying flat on his back as referee Bill Clancy waved an end to the bout at 1:27 of the round.

Vasquez was stopped for the first time in his career, and it came in his first fight after suffering his first career loss to Felix Diaz in July.

More than a decade removed from his championship reign at 147 pounds, the 35-year-old Collazo began to heat up after Vasquez controlled the first two rounds using his footwork and an active jab.

Vasquez opened a cut above Collazo's right eye with a punch in Round 3 just moments before the bloodied Brooklyn, New York, resident floored Vasquez with a right to cap a 1-2 combination to the head.

Vasquez not only recovered from the second knockdown of his career, but he rocked Collazo early in Round 4 with an overhand left and pressed forward as the action heated up. But Collazo seemed content to exchange punches with his back against the ropes in what was a punishing round for both fighters.

After a more tactical Round 5, the fighters chose to exchange punches in the center of the ring in the sixth until Collazo brought the fight to a halt with his devastating right hook.

Collazo’s stoppage of Vasquez represents his biggest win since he knocked out former 147-pound champion Victor Ortiz in the second round in January 2014.

Collazo gains the upper hand against Vasquez with devastating knockout

What happens when two skilled boxers at opposite points in their careers meet in a fight that neither believes he can afford to lose? We’re about to find out.