Malik Scott outboxed Tony Thompson over 10 rounds and won a unanimous decision in a battle between veteran heavyweights.

Tony Thompson vowed to “methodically” dismantle Malik Scott at The Venue at UCF in Orlando, Florida, but it was Scott who owned the ring most of the night in the meeting of veteran American heavyweights. 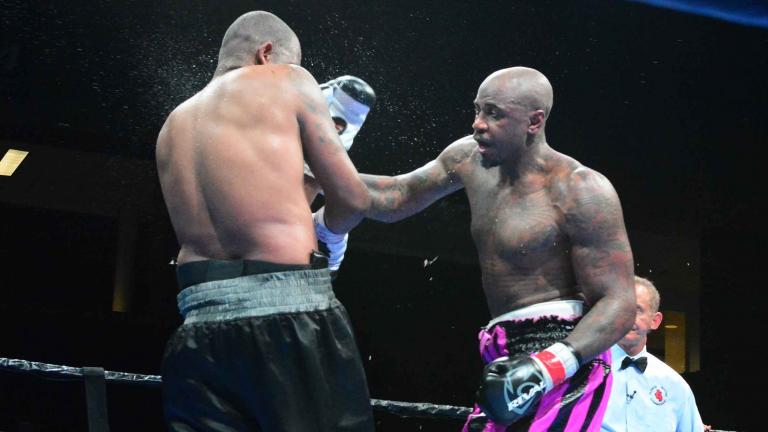 Malik Scott scores with a right hand during his win over Tony Thompson in Orlando, Florida. (Todd McLennan/Premier Boxing Champions)

With champion Deontay Wilder looking on from ringside, the 6-foot-4 Scott (38-2-1, 13 KOs) was the slicker fighter throughout, surviving a ninth-round knockdown to earn a unanimous decision over the 44-year-old Thompson (40-6, 27 KOs).

The 35-year-old Scott looked the fresher fighter the entire fight, and dictated the tempo from the start. The Philadelphia native used his jab and lateral movement against Thompson to land his right hand seemingly at will.

Scott also employed spin moves to force Thompson to the ropes before getting off several more shots. He continued to outmaneuver the plodding Thompson into the third, where he shook him on two occasions, the second time with successive left uppercuts.

“My skill set was good, but this is one of those tapes I will hate to look at when I get home,” Scott said. “Tony got away with a lot. I was making him miss and not making him pay.”

Although Scott absorbed some body blows along the ropes in the fourth, his head feints and angles were still enough to set up right hand and left-hook counters.

Starting in the fifth, an increasingly relaxed Scott dangled his hands and commanded the middle of the ring. In the sixth, he increasingly loaded up on the sluggish Thompson with lead rights, left hooks and uppercuts—often uncontested.

“He was just too fast. If I was 43, I would have caught him,” Thompson said. “A prime Tony would have kicked his ass, but I’m 44 and the years are starting to pile up.

“Malik did a great job of staying away until I was able to catch him with one good shot. He just pitty-patted his way to victory. I would rate my performance a ‘D’ at best.”

Thompson did his best work to the body during the rare moments when he got Scott on the ropes, but the former title contender floored Scott with a big right hand to the temple in the ninth.

“I was hurt in the ninth, definitely,” Scott said. “But I’m in great shape and I wasn’t worried about it. I got through it and let him know he’d have to do it again to win this fight.”

Tony Thompson vowed to “methodically” dismantle Malik Scott at The Venue at UCF in Orlando, Florida, on Friday, but it was Scott who owned the ring most of the night in the meeting of veteran American heavyweights.

In September 2012, Malik Scott was 35-0 and gaining steam in the heavyweight division. Four fights and 18 months later, he was 36-2-1 and facing a career crossroads.