Heading into his 147-pound showdown against Errol Spence Jr., Chris Algieri claimed that his undefeated opponent had been coddled and would “feel my power early.” Algieri’s trainer John David Jackson took it a step further, stating that Spence had “been spoon-fed his opponents” leading up to Saturday’s clash.

Turns out it was Algieri who was forced to eat his words—not to mention a bunch of punches from his “coddled” foe—as Spence put on a boxing clinic, scoring three knockdowns on his way to a fifth-round TKO win at Barclays Center in Brooklyn, New York.

Looking as if he was extra motivated by Algieri and Jackson’s pre-fight words, Spence came out with a vengeance from the opening bell. The 26-year-old from Desoto, Texas, pinned Algieri on the ropes during the second and third rounds, unleashing a searing double-handed barrage of hooks, crosses and uppercuts.

In the fourth round, Algieri took a knee after getting clobbered with a left cross. The lifelong resident of Huntington, New York, made it to his feet and finished the round, but early in the fifth, Spence unleashed another left that sent Algieri reeling backward and onto his backside.

As he fell awkwardly, Algieri appeared to injure his right leg, wincing and grabbing at his right knee while sitting on the canvas. Again, though, the 32-year-old made it to his feet, and again, Spence went on the attack, this time finishing the job with a brutal, head-swiveling left cross.

By the time Algieri crumpled to the canvas, referee Benjy Esteves stepped in and waved an end to the bout at the 48-second mark. 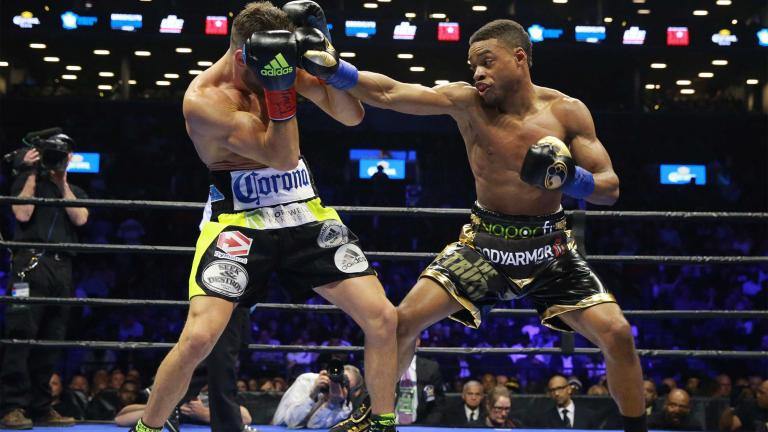 Despite fighting in Chris Algieri’s backyard, Errol Spence Jr. will have a lot of support in Brooklyn bout

When Errol Spence Jr. returns to the ring April 16, the 147-pound contender will have plenty of familiar faces in his corner at Barclays Center in Brooklyn, New York.

Back in November 2014, Chris Algieri suffered through a nightmare of an evening against Manny Pacquiao, getting dropped six times in an ugly 12-round loss. Next month, rising star Errol Spence Jr. will be looking to deliver a similar beatdown to Algieri.

Errol Spence Jr. ready to put his star power to the test against tough Chris Algieri

One of the most talented and feared young contenders in boxing gets his chance to shine on the big stage—and all he has to do is fight a former champion on his home turf.