Glowacki (26-0, 16 KOs) twice floored Cunningham (28-8-1, 13 KOs) with second-round, left-hand counters, then used short right hands to drop him once more in the 10th and 12th rounds en route to a unanimous decision.

Thanks to the four knockdowns, Glowacki prevailed by scores of 115-109 twice and 116-108, much to the delight of a Barclays Center crowd that was packed with Polish fight fans. However, the contest was tougher than the scorecards indicated, as the 29-year-old Glowacki was often forced to hold or fight off the ropes against a game challenger who engaged toe to toe throughout the night.

A 39-year-old two-time champion in the 200-pound division who spent four years fighting at heavyweight, Cunningham had hoped to recapture past glory by returning to the weight class. However, he struggled to avoid the come-forward champion’s power left hands or take consistent advantage of his three-inch height and seven-inch reach edges.

Still, Cunningham didn’t make things easy for Glowacki, who was making the first defense of the championship he won in August by rising from a sixth-round knockdown to dethrone Marco Huck by 11th-round stoppage.

With the win, Glowacki kept his perfect record intact, while Cunningham fell to 4-6-1 in his last 11 fights. 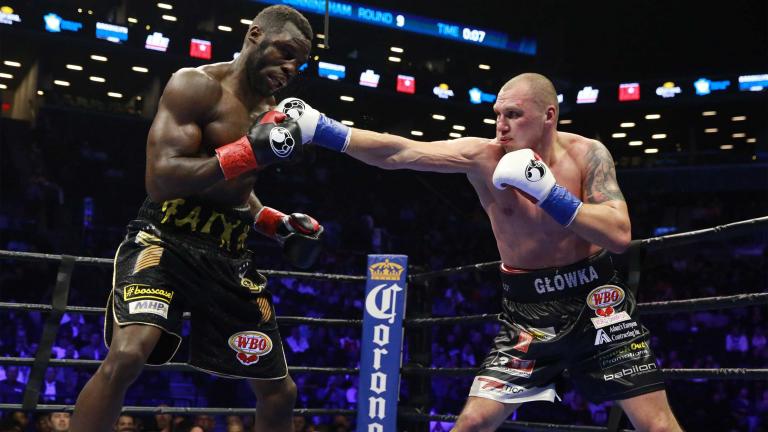 Krzysztof Glowacki tags Steve Cunningham with a jab during their 12-round battle Saturday. Glowacki dropped Cunningham four times on his way to a unanimous decision victory to retain his 200-pound title. (Ryan Greene/Premier Boxing Champions)

When Steve Cunningham enters the ring Saturday, he’ll attempt to take down an undefeated champion who is 10 years his junior. If the 39-year-old former heavyweight pulls it off, he will have defied some long odds.

Polish fight fans should be plenty familiar with Steve Cunningham at this point.