Carl Frampton insisted that a rise in weight would make a huge difference in punching power and stability against 126-pound champion Leo Santa Cruz. Santa Cruz figured his aggression and volume punching would overcome whatever the ex-122-pound champ offered.

As was the case with his punches in the ring, Frampton’s pre-fight assertion proved a little more accurate than his opponent’s.

Two judges scored the bout 117-111 and 116-112 for Frampton, while the third had it 114-114. That gave Santa Cruz his first professional defeat, while making Frampton the second Irishman to win two world titles and the first Northern Irishman to accomplish the feat.

Despite making just his second appearance on U.S. soil, Frampton had the majority of the 9,062 fans in attendance on his side the entire night. The 29-year-old from Belfast gave his supporters much to cheer about early on as he came out boxing and moving effectively behind his jab and right hand.

Frampton pressed the action in the second, out-gunning Santa Cruz toe-to-toe, and landing evenly to the head and body. Then with about 45 seconds remaining in the frame, Frampton sent the champion staggering backward into the ropes courtesy of a short, powerful left to the temple.

Although he failed to become the second man to drop Santa Cruz, Frampton continued to beat his 27-year-old opponent to the punch in the third, highlighted by a pair of head-swiveling right uppercuts with about a minute to go.

In the fourth and fifth, the 5-foot-5 Frampton had the taller Santa Cruz running into counter shots, absorbing right hands in order to positioning himself for his own solid left hooks, many of which landed flush.

Santa Cruz was at his best in the sixth and seventh rounds—which he swept on the judges’ cards—landing the cleaner rights and lefts to the head during furious, crowd-pleasing exchanges. Late in Round 6, Santa Cruz wobbled Frampton with a hard right hand, and closed with a right-left combination before the bell.

Frampton started to regain control beginning in the eighth by showing his versatility, out-maneuvering Santa Cruz from distance, and firing powerful and effective left-right combinations.

Both fighters went for broke in the final two rounds, throwing and landing a barrage of power shots from close range, with both men displaying incredible resilience while refusing to give ground.

As they dished out and absorbed incredible punishment down the stretch, it was clear that each man was determined to do whatever was necessary to leave the arena with his unbeaten record intact.

In the end, only Frampton was able to do so. 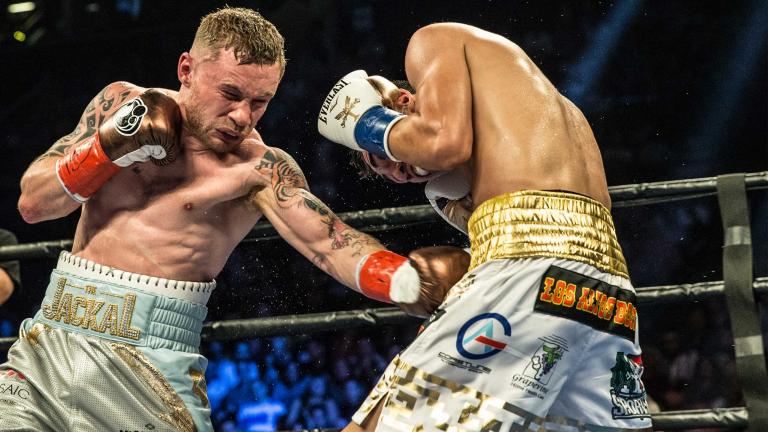 This week in boxing history, PBC highlights knockout wins by three heavyweight greats, a triumphant finale for a middleweight legend and a Northern Irishman earning a second world title in a thrilling featherweight matchup.

Presenting the 12 Rounds of Christmas: Round 11 (Santa Cruz vs Frampton)

Pick a round, any round, from the Leo Santa Cruz-Carl Frampton instant classic. We likely could’ve justified its inclusion on this list.

Carl Frampton insisted that a rise in weight would greatly increase his punching power and stability against 126-pound champion Leo Santa Cruz. Santa Cruz figured his aggression and volume punching would overcome whatever the ex-122-pound champ offered.