Former two-division champion Mikey Garcia was sharp after a 2½-year layoff, scoring four knockdowns on his way to a fifth-round TKO of Elio Rojas.

Garcia scored four knockdowns of former 126-pound champion Elio Rojas as he earned a fifth-round TKO in their 140-pound bout.

Garcia, a former world champion at 126 and 130 pounds, was competing for the first time since he decisioned Juan Carlos Burgos in January 2014 due to a prolonged legal battle with his former promoter.

Rojas was fighting for just the second time since losing a 126-pound title bout to Jhonny Gonzalez in April 2012, and for the first time since outpointing Robert Osiobe over eight rounds in August 2014.

Even so, the 33-year-old Dominican outboxed Garcia over the first two rounds, moving well as he worked mainly behind his jab.

Garcia, a 28-year-old Southern California native, began to find the range midway through Round 3 as he dropped Rojas with a right hand-left hook combination before again sending him to the canvas 30 seconds later with a straight right.

Rojas retaliated with some good shots over the next couple of rounds, but Garcia was seemingly unfazed as he continued his attack.

The end came in Round 5 as Garcia delivered a potent combination of punches that sent Rojas diving prone to the canvas, then finished him off seconds later with a solid left hook that sent Rojas backward and down.

Rojas rose to beat the count, but referee Eddie Claudio waved an end to the bout at the 2:02 mark.

It was the first time Rojas was stopped in his career.

​Garcia improved to 6-0 with five KOs in his career against current or former world champions. 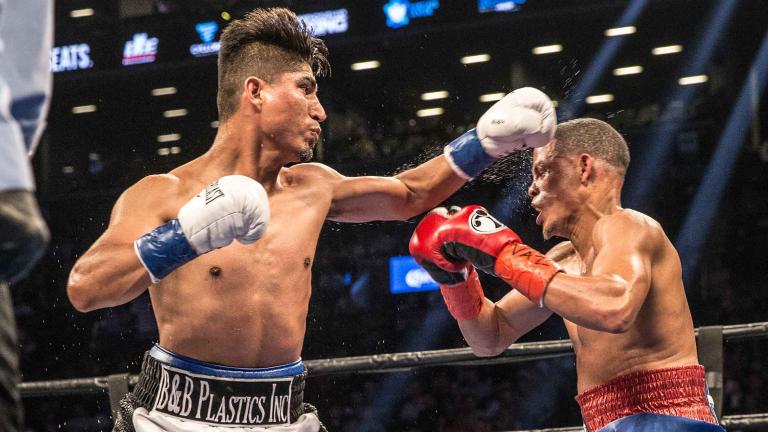 Garcia returns with a roar, wipes out Rojas in five rounds

Having last punched somebody in an actual match 2½ years ago, Mikey Garcia has developed a bit of an appetite for destruction. Actually, the former two-division champion is downright starving.

Mikey Garcia witnessed last month’s epic Keith Thurman-Shawn Porter showdown from ringside at Barclays Center in Brooklyn, New York, and was blown away—not just by the performance of the two world-class fighters, but also by the raucous atmosphere.