Peter Quillin came in as the heavy favorite Saturday at Foxwoods Resort Casino against up-and-comer Michael Zerafa. And he showed why with a devastating fifth-round knockout that saw the Australian challenger leave the ring on a stretcher.

Quillin was throwing power punches with abandon through the first three rounds and saw several left hooks land square, but Zerafa managed to stay on his feet.

In a tactical shift, Quillin started jabbing more in the fourth, which helped set up those power shots.

It all came to a head in the fifth when Zerafa, who fought patiently behind the jab throughout much of the fight, seemingly abandoned his game plan and went toe-to-toe with Quillin.

As the two banged away from one side of the ropes to another, Quillin blasted a right directly to Zerfa’s nose that ended the fight as convincingly as a gunshot.

Referee Arthur Mercante Jr. immediately waved it off, though Zerafa showed no signs of even attempting to get up and was taken out of the ring on a stretcher. 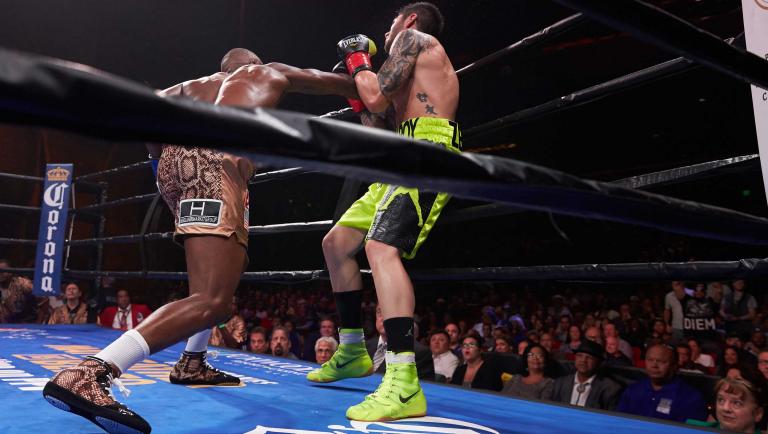 The fight was brought to a halt in Round 5 after a power punch from Peter Quillin saw Michael Zerafa knocked to the floor. (Suzanne Teresa / Premier Boxing Champions)

Sergio Mora: One punch can be ‘The Eraser’

Boxing is like baseball in the sense that no matter how many runs a team is down, the game can turn in one inning. In boxing, it only takes one blinding punch to gain a fight-saving knockout. We call that “The Eraser.”

Science has been known to run in families. The Curies racked up five Nobel Prizes between Marie, Pierre, their kids and assorted other members. Charles Darwin had children who went into astronomy and botany.

Strap on a heart-rate monitor and get to work with Kid Chocolate as Peter Quillin takes you through a typical workout en route to his Saturday tilt against Michael Zerafa at Foxwoods Resort Casino in Mashantucket, Connecticut (NBC, 4 p.m. ET/1 p.m. PT). If you ever wanted to burn more than 1,000 calories in fewer than 90 minutes, this is the plan for you.