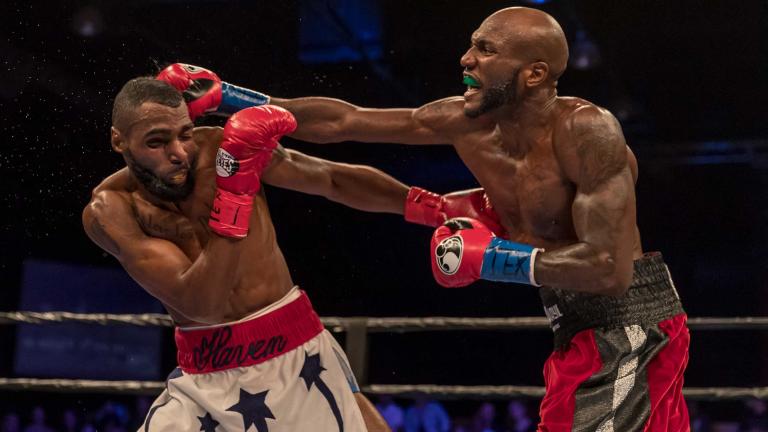 Darwin Price tags Javontae Starks with an overhand right during their fight Saturday night in San Antonio. Price used his stinging jab to set up big power shots and won by seventh-round TKO to improve to 11-0. (Josh Jordan/Premier Boxing Champions)

Working consistently behind his piston-like left hand, Price was able to follow up with power shots as he earned a seventh-round TKO in a 142-pound battle of prospects.

Price (11-0, 6 KOs) frustrated Starks (13-2, 7 KOs) throughout the scheduled eight-round bout with his jab, which he effectively doubled up to set up combinations.

After a measured first two rounds in which both boxers threw almost nothing but jabs, Price loaded up a right hand behind a pair of jabs to knock Starks to the canvas in Round 3.

From there, Price continued to use his bread and butter to score consistently and was in full control of the contest heading into the seventh round. That's when the St. Louis native who now fights out of Houston landed another crisp double jab followed by a straight right that hurt Starks, who immediately tried to hold on.

Knowing he had his opponent in trouble, Price began throwing wildly with both hands in an attempt to finish off Starks, who was pinned against the ropes.

Price, 27, then connected on a straight right that stunned Starks and began to dial in with both hands. Once again, Starks held on, leading referee Mark Calo-Oy to briefly separate the fighters. Seconds later, though, Calo-Oy stepped right back in to stop the fight at 1:52 of the round.

Price, who was a star distance runner at Grambling State University for four years before starting his pro boxing career, earned his first stoppage since July 2015, having won his last two fights by eight-round unanimous decision.

Meanwhile, the loss was the second straight for Starks, who was fighting for the first time in more than 300 days since dropping an eight-round decision to Samuel Figueroa on October 30 in Orlando, Florida.

An extended family connection has raised the stakes for an already intense and intriguing showdown between Darwin Price and Javontae Starks.

With two champions in his corner, unbeaten Price works to improve his craft

Darwin Price probably doesn’t require any external motivation to put in the extra gym work required to become a championship-caliber fighter. But if the unbeaten 140-pound prospect did need such motivation, all he’d have to do is peer over his shoulder.