Levan Ghvamichava rebounded from his second career defeat with an impressive seventh-round TKO of Breidis Prescott.

The last time fight fans saw Levan Ghvamichava prior to Tuesday night, the hirsute Eastern European was doubled over on his right knee and being counted out after getting tagged with a fifth-round shot to the liver.

Fast-forward nearly four months, and Ghvamichava entered the same venue to take on hammer-fisted veteran Breidis Prescott, only this time “The Wolf” exited in an entirely different manner.

The 5-foot-11 Prescott enjoyed a two-inch height advantage against Ghvamichava and used it to dictate a double-fisted attack—mostly to the body—in the first round. Then in a hotly-contested Round 2, Prescott thrice drove his smaller foe to the ropes. But by the end of the stanza, the 33-year-old was picking himself up off the canvas after a ruled slip, although it appeared Ghvamichava landed a grazing left as Prescott was falling.

Motivated by a between-rounds pep talk from trainer Virgil Hunter, Ghvamichava went on the offensive in Round 3 and forced Prescott into retreat. Ghvamichava, 30, continued to dish out punishment in the fourth, eventually flooring a bloody-mouthed Prescott with a late-round, left-right combination.

Already in full control of the fight by the start of Round 7, Ghvamichava landed a big left hook early in the stanza that staggered and dropped Prescott. A fatigued Prescott barely made to his feet, then soon hit the deck twice more from ruled slips.

Knowing his opponent was on unsteady legs, Ghvamichava went for broke late in the round, throwing six unanswered punches that forced Prescott into a corner. A final right-left combination landed flush to Prescott’s head, leading referee Michael Margado to step in and stop the contest at the 2:37 mark. 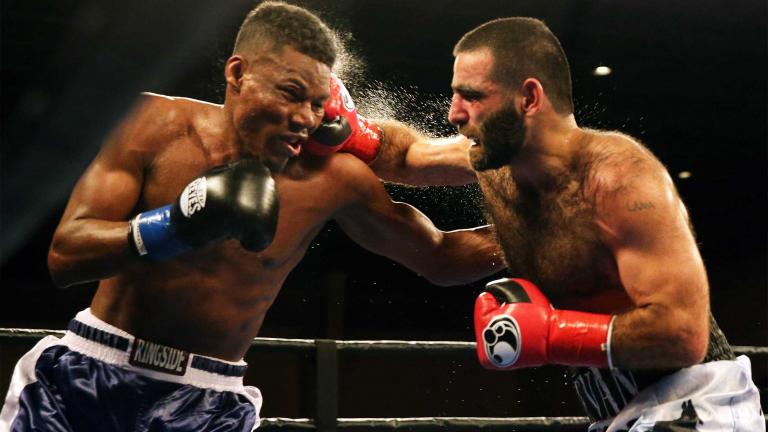 The last time fight fans saw Levan Ghvamichava prior to Tuesday night, the hirsute Eastern European was doubled over on his right knee and being counted out after getting tagged with a fifth-round shot to the liver.

Despite opponent changes, Ghvamichava ready to roll against Prescott

One thing you can say about Levan Ghvamichava: “The Wolf” knows how to roll with the punches.

After his first two scheduled opponents dropped out for different reasons, Levan “The Wolf” Ghvamichava is hoping the third foe is the charm.