Only one person can call Abner Mares “little man”: himself.

The 126-pound fighter may be small in stature, but he’s big on punching power. As Mares prepares to battle Arturo Santos Reyes as part of the inaugural Premier Boxing Champions card on March 7, he names his top three fights:

Mares suffered his only defeat against 126-pound champion Gonzalez, who rocked Mares with a thundering left hook and knocked him down twice en route to a first-round TKO.

“I was stunned. I just couldn’t believe it,” Mares recalled. “It’s like, ‘Wow, is this really happening?’ And then when the fight was over, it hit me that I really lost.”

Mares said that he learned plenty from his lone setback.

“It’s just one of those fights that lets you know that you’ve got to be ready for anything,” he said. “Physically, I might have trained hard, but mentally, I was just taking the fight too easy. It was a fight that opened my eyes.” 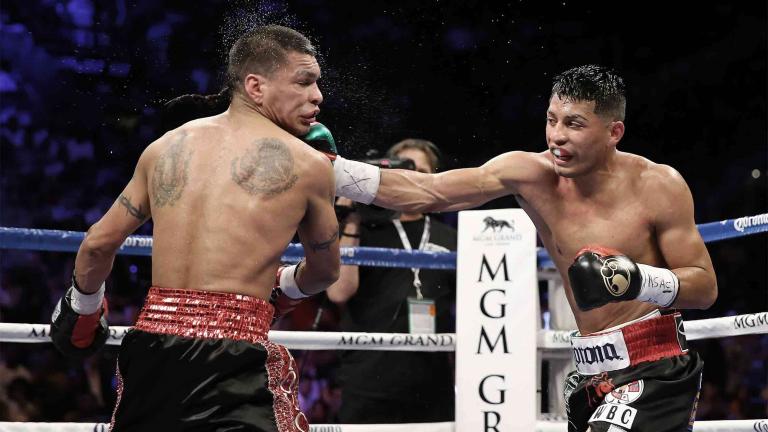 Mares moved up from 122 pounds to contend with the stone hands of hard-hitting former 126-pound champ De Leon.

“He had a great power punch, he was a strong fighter,” Mares says. “People gave me really low chances of beating this guy and becoming world champion.”

But not only did Mares beat him, he beat him up, scoring a pair of knockdowns and slugging his way to a ninth-round TKO victory, winning a title in his third different weight class.

“He’s really awkward, a great boxer and to top it off, a southpaw,” Mares says. “All around he was just a difficult fighter.”

Nevertheless, Mares won a unanimous decision over his cagey opponent, demonstrating that he could fight with finesse and force alike.

“Because of my fighting style, people thought that I was an easy target for Anselmo,” Mares says. “They thought that it was going to be target practice for him and that he was just going to outbox the aggressive Abner Mares. Well, I proved them wrong once again.”

As he prepares to launch a new podcast and make a ring return, the former three-division world champion reflects on the events that led to depression and how he overcame it.

This Week on The PBC Podcast: Danny Garcia & Abner Mares

Two of the game’s best discuss how they’re passing time during the pandemic and what’s next for them once boxing resumes.