Romanian-born southpaw Lucian Bute once ruled the 168-pound division, and now the former world champion is looking to take it back. Read Bio

Bute was stopped in the fifth round of the 175-pound title eliminator. 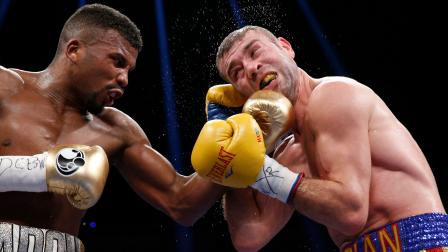 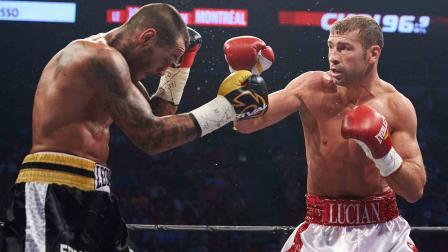 Who wins the battle of fragile psyches between Badou Jack and left-handed former titleholder Lucian Bute?

Badou Jack and Lucian Bute back on the winning track, ready to rumble in 168-pound title tilt

Lucian Bute dictated a toe-to-toe clash with switch-hitting, 168-pound rival James DeGale in November, often pursuing the Englishman to the ropes and pounding away at his head and body.

Lucian Bute hails from Dracula’s homeland of Romania, and the former world champion conjures nightmares of his own with ferocious body punching, fast hands and a wicked uppercut. After relocating to Montreal to begin his pro career, Bute stormed his way to a 168-pound world title and defended it nine times before being dethroned. Now, he’s out to reclaim what was once his.

After fighting for the Romanian national team as an amateur, winning multiple titles in both his homeland and abroad, Bute relocated to Montreal, where he made his pro debut in November 2003 with a third-round TKO of Robert Muhammad.

Measuring in at 6 feet 2 inches, Bute has often been taller than his opponents, which tends to play directly into his game plan.

“I use my reach advantage and keep my opponent at a distance,” he said in a 2007 interview with boxing website FightFans.com. “I like to believe that I am an intelligent fighter and I try not to get hit. I believe that I am a spectacular and clean boxer.”

Underscoring his words, Bute’s career got off to a scintillating start. He stopped his first 15 opponents before Andre Thysse finally took the southpaw the distance in March 2006, even though Bute won every round in earning a unanimous decision.

A little more than a year later, Bute would defeat former The Contender winner Sakio Bika, setting up a title fight with Alejandro Berrio in Montreal in October 2007.

Bute stopped Berrio in the 11th round with a barrage of shots to the head, becoming just the third Romanian fighter to win a world championship.

A long reign as the champ

After defeating former 160-pound champ William Joppy in his first title defense in February 2008, Bute took on Librado Andrade, who possessed one of the most durable chins in the sport.

Bute dominated throughout the fight, but Andrade scored a dramatic knockdown with seconds left to go in the 12th round, although Bute would hang on to win a unanimous decision.

This set up a November 2009 rematch in which Bute answered any lingering questions from the first fight by thoroughly outboxing Andrade before gaining a fourth-round KO.

From there, Bute would continue to pile up the title defenses, stopping Edison Miranda in three rounds in April 2010, knocking out Jean-Paul Mendy in Round 4 in July 2011 and winning a decision over former 175-pound titlist Glen Johnson in November 2011.

Along the way, Bute became a star attraction in the boxing hotbed of Montreal, regularly packing the city’s Bell Centre.

After successfully defending his world title nine times, Bute traveled to Nottingham, England, in May 2012 to face British bruiser Carl Froch in what was the biggest fight of his career up to that point.

It would be the hometown fighter’s night, however, as Froch hammered his way to a decisive fifth-round TKO.

Following his first career loss, Bute moved up to 175 pounds to take on Denis Grachev in November 2012 in Montreal, where he won a tight unanimous decision.

After being sidelined with an injury to his left hand, Bute would then challenge fellow Montreal favorite Jean Pascal in the biggest fight ever between two local fighters, drawing more than 20,000 fans to the Bell Centre in January 2014.

Bute got off to a slow start, but he built some momentum for himself in the second half of the bout. It wasn’t enough, however, as Pascal won a unanimous decision.