Lubin wins at the 1:58 mark of the sixth round after landing a series of unanswered punches, leading Lora's corner to call an end to the fight.

Erickson Lubin stepped in the ring at Full Sail Live in Winter Park, Florida, looking to prove that, sometimes, youth can indeed trump experience. And prove it he did.

The unbeaten 19-year-old pummeled Orlando Lora from the opening bell, dropped the veteran Mexican fighter in the second round and finished him off in the sixth, using a barrage of more than a dozen unanswered punches that forced referee Frank Santore to step in and stop the bout at the 1:58 mark.

Fighting near his home in Orlando, Florida, Lubin gradually broke down Lora starting in the second round of the scheduled 10-rounder, as he repeatedly cornered the native of Culiacan, Mexico, ripping him—even-handedly—to the head and body.

Toward the end of the second, a straight left hand rocked Lora and sent him into the corner turnbuckle. Ruling that the ropes were the only thing keeping Lora from hitting the canvas, Santore called a knockdown with four seconds remaining in the round.

Lora did rebound and had a much better third round, finding the mark with counters and occasionally roughing up Lubin in retreat. But Lubin quickly regained control.

In the fourth and fifth, Lubin regularly rocked his opponent, forcing him backward with hard lefts and combinations to the body, while also finding seams up the middle to bobble Lora’s head.

Before taking on Lubin, Lora had been knocked out by Julian Williams, Jermall Charlo, Keith Thurman and David Estrada, and also lost by decision to Paulie Malignaggi. Facing a heavy-handed and quickly maturing teenager, Lora once again was unable to make it to the final bell. 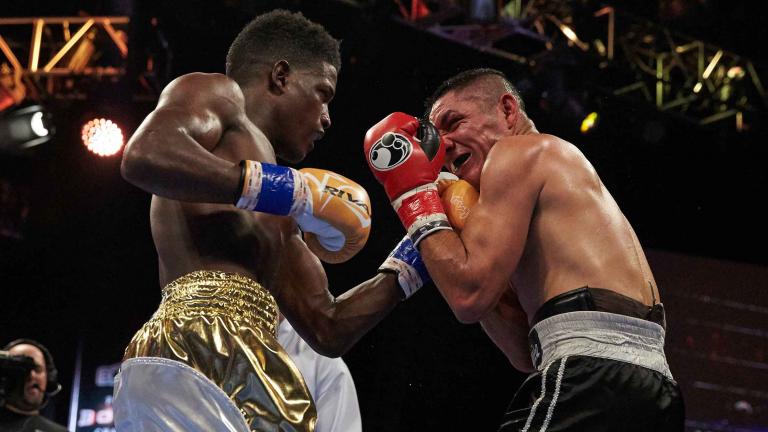