Erickson Lubin has taken to calling his right hand “The Jackhammer” and his left “The Sledgehammer.” And while the 20-year-old southpaw failed to record his fifth consecutive knockout Sunday night, he certainly displayed his double-fisted power—not to mention a resolute chin—as he remained unbeaten and continued his march from prospect to contender. 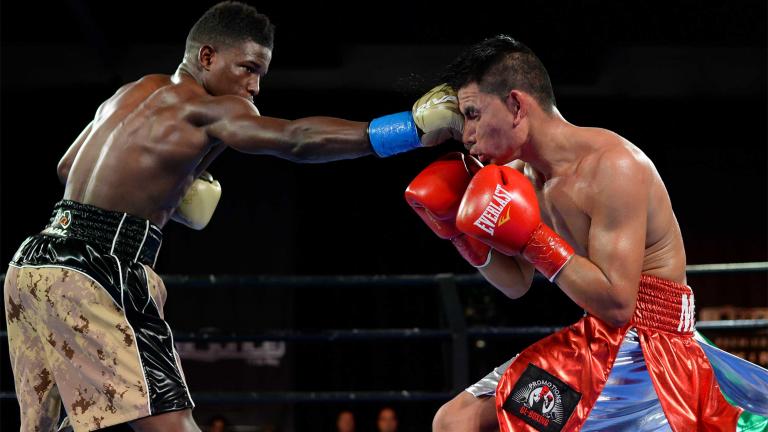 With a partisan crowd at Seminole Casino Hotel in Immokalee, Florida, chanting his nickname “Hammer,” Lubin delivered viciously to the head and body, absorbed counter shots and scored a fifth-round knockdown en route to a 10-round, near-shutout victory over Jose De Jesus Macias.

Despite failing to continue his stoppage streak, Lubin (14-0, 10 KOs) did nothing to slow his momentum as one of boxing’s hottest 154-pound prospects, as the Orlando, Florida, resident dominated the 24-year-old De Jesus Macias (18-5-2, 9 KOs).

Lubin attacked from the outset, using a straight left over a stiff jab and vicious second- and third-round body shots that forced Macias to retreat. The ruled knockdown occurred in the fifth, when Lubin connected with a counter right hook that caused Macias’ right glove to briefly touch the canvas.

A native of Mexico who was making his U.S. debut, Macias gave nearly as good as he received in the eighth and ninth, standing toe to toe and matching the powerful Lubin to the head and body. The crowd appreciated the effort, encouraging Macias with chants of “Mexico.”

But Lubin once again stepped up the pressure in the 10th, punctuating the night with a round-ending four-punch combination, all to the head.

For Lubin, the 10-round affair marked the longest bout of his young career. It also matched the number of rounds he fought over his previous four contests combined.

Erickson Lubin failed to record his fifth straight knockout Sunday night in his native Florida. It was just about the only negative thing you can say about the 20-year-old’s performance.

If USA Boxing had its way, unbeaten 154-pound prospect Erickson Lubin would be preparing to compete in this summer’s Rio Olympics instead of fighting Jose De Jesus Macias on Sunday night.

As his onetime teachers can attest, Erickson Lubin brings more to the ring than just his iron fists

With 10 knockouts in 13 career fights, Erickson Lubin clearly possesses the physical tools required to succeed in the ring. Not to be overlooked, though, is Lubin’s mental acumen—the dude is a natural problem solver. Just ask one of his former math instructors.