A devastating puncher, Julius “The Chef” Jackson has used raw power to slice and dice his way into title contention in the 168-pound division. Read Bio

Jackson was stopped in the third round after a strong start. 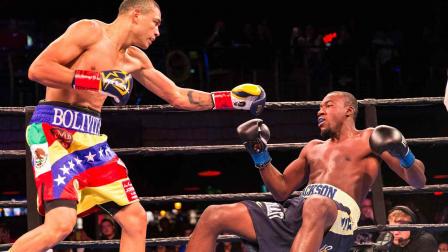 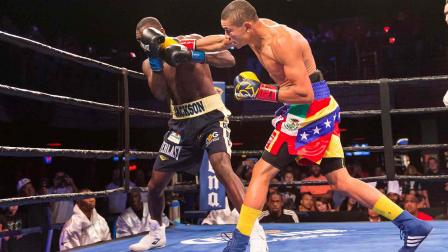 PBC boxers lend a helping hand with disaster relief efforts in Mexico, Florida and the Caribbean

Current and former world champions Andre Berto, Jermell and Jermall Charlo, Erislandy Lara and Abner Mares teamed up with business partners in their local communities to provide assistance to victims of recent hurricanes and earthquake.

Julius Jackson—a 175-pound contender, trained chef, and native of St. Thomas in the Virgin Islands—has been putting his culinary skills to use over the last week by helping to feed victims of Hurricane Irma.

Competing for one’s country at the Olympics is one of the greatest honors an athlete can achieve. With the Rio Summer Games getting underway this weekend, some of PBC’s Olympic veterans shared their own memories and offered advice to this year’s athletes.

To say that Julius “The Chef” Jackson was born to be a boxer just because his father, Julian Jackson, was a three-time world champ in two divisions might be a bit too simplistic. But once he took up the sport, it was inevitable that the son of one of boxing’s greatest power punchers would fall under the category of knockout artist. The former Olympian is also an accomplished chef whose culinary talents rival his prowess in the ring.

A couple of years after Julian Jackson wrapped up his Hall of Fame career, 13-year-old Julius Jackson found his way to the boxing gym and began the process of following in his father’s footsteps.

Through hard work, dedication and, yes, some pretty good genes, Jackson enjoyed a stellar amateur career in which he would go 27-9, win three Caribbean titles and represent his native Virgin Islands in the 2008 Olympics in Beijing.

After going one and done in Beijing, where he lost to Ireland’s Kenneth Egan, Jackson chose to take his talents to the professional ranks.

Making his debut on the same card as his younger brother, John, on January 30, 2009, Jackson won a four-round unanimous decision over Marvin Blair in the Virgin Islands. It would be one of the rare times when Jackson’s opponent would make it to the final bell.

Jackson ended 2009 with a 4-0 mark, winning two fights by knockout and two by unanimous decision. The following year, he would truly begin to display the prodigious power that made his dad—ranked No. 25 on Ring’s list of the greatest punchers of all time—so famous.

In 2010, five opponents dared to share a ring with Jackson, and he turned aside all five, scoring four knockouts and a lopsided unanimous decision. Then in April 2011, Jackson began an amazing run in which he stopped six straight opponents in two rounds or less.

He continued his KO streak into December 2013, although it took him nine rounds to take down unbeaten Nicolas Dario Lopez in Cordoba, Argentina.

Jackson then gained two more stoppage wins in 2014, gaining a second-round TKO of Crispulo Javier Andino in Argentina in August before dropping Jonathan Nelson twice en route to a ninth-round TKO in Shelton, Washington, in December.

“I consider myself to be the full package, but I still don’t feel like a knockout artist,” Jackson told TheFightCity.com in 2015. “I love mixing up combinations, making my opponent miss, and I love using my jab. But naturally I have some of my dad’s power, as you can see from my record.”

It’s tempting to look at Jackson’s nickname and assume he’s paying respects to a dearly departed South Park character, but Jackson’s toque is no joke.

He’s a 2008 graduate of the Florida Culinary Institute, was the head chef at Fat Turtle in St. Thomas and won St. Thomas’ “King of the Wings” chicken-wing competition in 2012. So it’s clear the man has a plan for his future outside the ring.

For now, though, Jackson is much more interested in using his hands to carve up his opponents rather than a slab of prime rib. And he’s not about to let up until he’s joined his dad at the pinnacle of the sport.

“With my father being who he is, my dream has always been to reach this level and then surpass this level,” Jackson said. “I’m working extremely hard for this opportunity, and I’m ready for my shot.”