Anthony Joshua had to work harder than he expected against Dominic Breazeale, but he finished the job early once again to retain his world heavyweight title.

Fighting before a capacity crowd of 20,000 at the O2 Arena, Joshua gained two knockdowns to stop Breazeale in the seventh round, capping another dominating performance by the 26-year-old British star, who remained unbeaten with his 17th stoppage in 17 career bouts.

Joshua came out roaring from the opening bell as he caught Breazeale with a sharp left hook. The champion then followed with a lightning combination at the end of Round 1 that left the American floundering.

Joshua staggered Breazeale with a huge left hook in the first 30 seconds of the second round, then hurt him again late with another left that sent Breazeale reeling around the ring, although he survived the onslaught.

Breazeale, 30, came out for the third round sporting a black eye and bloodied nose, but he continued to show a solid chin as Joshua landed almost at will working behind his jab and firing stinging shots with his left hook.

Joshua was making the first defense of the world title he won in April with a second-round KO of 6-foot-5 American southpaw Charles Martin, who went down without much resistance against the 6-foot-6 British slugger.

The 6-foot-7 Breazeale certainly proved that he could take a shot, though, and started to fire back with some combinations of his own in Round 5, but Joshua just seemed to shake off the best the challenger could deliver.

Joshua’s left jab kept the champ in control, but try as he might he still could not get rid of Breazeale, who refused to go down from a barrage of shots.

Joshua was taken into the seventh round for just the second time in his career, but he would not have to go much farther as his power began to break down the challenger.

After Breazeale caught Joshua with a left hook early in Round 7, the champ seemed to kick things into overdrive as he responded with a 1-2 combo that dazed the American.

A four-punch combination from Joshua put Breazeale on the canvas, and the British star finished him off seconds later with another combination, capped by a final left hook that left Breazeale slumped in the corner as Joshua paraded around the ring with his arms outstretched. 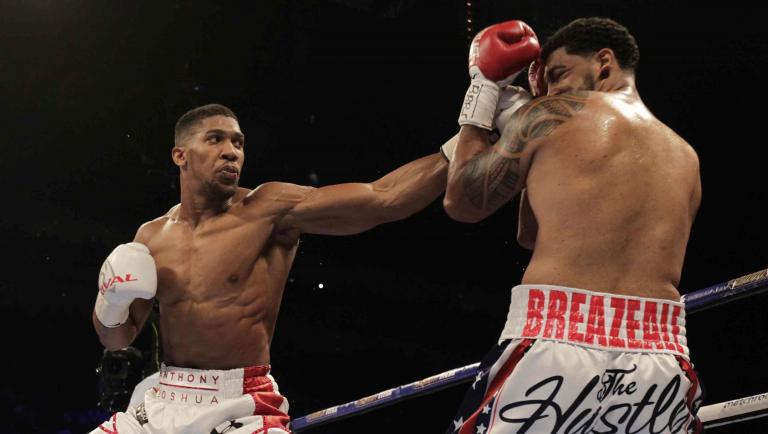 Anthony Joshua used his jab to set up his power punches against Dominic Breazeale on Saturday as he earned a seventh-round KO in London to retain his heavyweight world title. (Photo by Matchroom Sport)

Anthony Joshua had to work harder than he expected against Dominic Breazeale on Saturday, but he finished the job early once again to retain his world heavyweight title.

While differing in opinion on who will prevail Saturday in their heavyweight title showdown in London, both British champion Anthony Joshua and American challenger Dominic Breazeale agree on one thing: Someone is getting knocked out.

Charles Martin took some verbal shots at Anthony Joshua before his heavyweight title defense against the British slugger in April, but was quickly silenced on fight night. Now, Dominic Breazeale is engaging in some of those same tactics in advance of his clash with Joshua, although he vows to present a much tougher challenge.