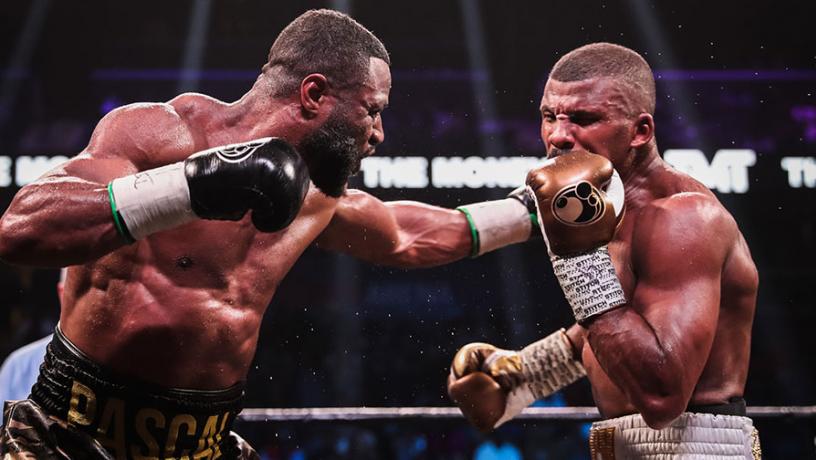 Jean Pascal defend his WBA Light Heavyweight Title with a via split-decision victory over Badou Jack.

The two-division world champion and current light heavyweight title-holder reflects on some of the most memorable nights of his historic 15-year career.

Shining Under the Bright Lights of Pressure

Andy Ruiz Jr., Julian Williams and Jean Pascal all overcame heavy odds to win world titles in 2019. Here’s how they did it.

No Contest vs Roberto Feliciano Bolonti 35-3-0

Two-division world champion Jean Pascal is rejuvenated and as good as ever. The still-fast and powerful veteran is now out to solidify what is fast becoming a Hall of Fame career.

Born in Port-au-Prince Haiti on October 28, 1982, Jean Pascal was four when he moved with his mother and an older brother to Laval, Quebec, Canada, just outside of Montreal.

After watching his brother become the Quebec Boxing Champion in 1996, a 13-year-old Pascal entered the sport, eventually winning the gold medal in the 2002 Commonwealth Games and representing Canada as a middleweight in the 2004 Olympics.

Pascal’s professional debut was a second-round stoppage of Justin Hahn on February 3, 2005, his first of 10 bouts that year. He won them all.

On December 10, 2005, Pascal scored a seventh-round TKO of Martin Desjardins for the Canada National and Quebec Boxing Council super middleweight belts. He continued to climb to ascend the 168-pound division, building up a record of 21-0 (14 KOs).

On December 6, 2008, Pascal challenged undefeated Brit Carl Froch for the vacant WBC world super middleweight title. The two engaged in one of the best battles that year. Froch would come out on top, winning a 12-round unanimous decision.

Pascal fought once more as a super middleweight, stopping Pablo Daniel Zamora Nieves in five rounds in April 2009 before rising to light heavyweight.

On June 19, 2009, Pascal made his 175-pound debut a memorable one, dethroning unbeaten WBC world champion via unanimous decision at Bell Centre in Montreal. Pascal’s next three title defenses, all at Bell Centre, were a 10th-round TKO of Silvio Branco in September 2009, a repeat decision over Diaconu that December, and a technical decision win over (December 11, 2009) and an impressive technical decision over previously unbeaten southpaw Chad Dawson in August 2010.

On December 18, 2010, Pascal battled the legendary Bernard Hopkins to a 12-round draw. The two would meet again on May 21, 2011. This time, Hopkins got the nod, winning a 12-round unanimous decision to become the new champion.

Pascal rebounded by winning three straight, capped by a unanimous decision over former world champion Lucian Bute in an all-Canada showdown on January 18, 2014. But in March 2015, Pascal failed in his world title bid, dropping an eighth-round TKO loss to Sergey Kovalev at Bell Centre. The two met again in January 2016 with the same result as Kovalev won a seventh-round technical decision again at Bell Centre.

Pascal returned in December 2016, stopping Marcelo Ramallo in three rounds. However, in June 2017, he lost to Eleider Alvarez via majority decision.

Undeterred, Pascal would stop two previously undefeated fighters in succession. On December 8, 2017, he defeated Ahmed Elbiali by sixth round TKO. He followed that up with an eighth-round stoppage of Steve Bosse in July 2018.

Those victories earned Pascal a shot at unbeaten WBA175-pound champ Dmitry Bivol on November 24, 2018. Bivol would win a unanimous decision.

Pascal stayed the course and then on August 3, 2019, he turned his career around. A decided underdog versus unbeaten lefty Marcus Browne, Pascal stunned the crowd at Barclays Center in Brooklyn, with a come-from-behind, three-knockdown, eight-round technical unanimous decision when Browne who could not continue due to a clash of heads that caused a cut over his left eye.

On December 28, 2019, Pascal took on two-division champion Badou Jack at State Farm Arena in Atlanta, Georgia, a state which had not hosted a bout in 21 years. Pascal and Jack, friends outside of the ring, battled like sworn enemies in the ring. Both scored knockdowns during tremendous action over 12 rounds. In the end, two judges scored it 114-112 for Pascal and a third had it 114-112 for Jack, giving Pascal the win in a Fight of the Year candidate.