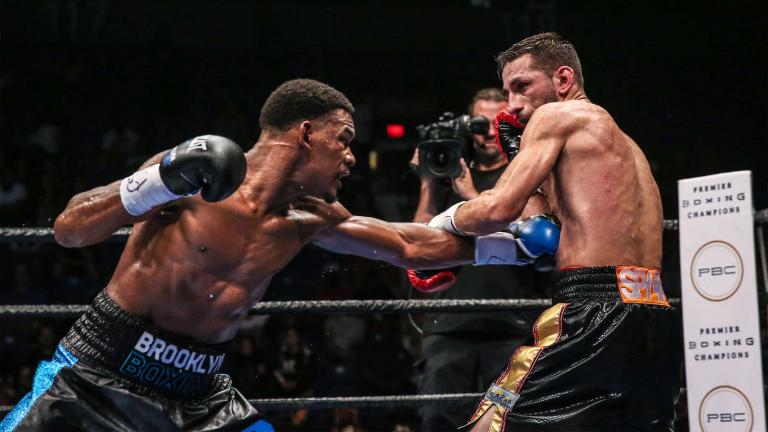 Five knockdowns later, Jacobs made good on his promise.

Some 13 months after defeating Mora (28-5-2, 9 KOs) by a somewhat controversial second-round TKO, Jacobs (32-1, 29 KOs) put on yet another power display en route to a seventh-round stoppage as he successfully retained his world title for a fourth time.

In what was an awkward and occasionally sloppy fight, Jacobs posted his 12th consecutive victory, all by stoppage. And it was arguably his most satisfying one of the bunch.

That’s because Mora and Jacobs engaged in a nearly yearlong verbal spat following their first meeting on August 1, 2015, when both fighters hit the deck in Round 1 before Mora fractured his right ankle on what was a ruled late second-round knockdown and was unable to continue.

While rehabbing his injury, Mora frequently took to social media and pressed Jacobs for a rematch. The champ finally relented, and the bad blood between the two continued in the lead up to the fight.

When the rivals finally got in the ring again, though, it didn’t take long for Jacobs to prove he was the superior boxer.

After a slow opening round, the “Miracle Man” began stalking a retreating Mora around the ring and patiently waited for his opportunities to unload.

The first big blow came in the second round, a rib-crunching body shot that Jacobs landed moments after surprisingly switching to a southpaw stance. The punch buckled Mora’s knees—the first of several shots that would stagger the 35-year-old from Los Angeles.

With an elusive, defensive Mora constantly slithering and ducking in an effort to stay out of harm’s way, Jacobs struggled to consistently find the mark with clean shots to the head. But the 29-year-old native of Brooklyn, New York, had plenty of success by attacking the body, which appeared to wear Mora down as the fight progressed.

After registering questionable knockdowns late in Rounds 4 and 5—the first appeared to be more of a slip, while the second was a shot that hit a twisting Mora in the shoulder blade—Jacobs ramped up the pressure in the sixth.

In that round, Mora landed one of his best punches of the night—a looping left hand—but Jacobs countered with an overhand right that wobbled the former 154-pound champion, who lunged forward and tried to grab hold of Jacobs before falling to the canvas on what was a ruled slip.

Sensing his foe was fading, Jacobs went for broke in Round 7, corning Mora and scoring a trio of knockdowns—the first off a left-right combination, the second from a left hook to the body and the third from another powerful right.

At that point, both Mora’s corner and referee Gary Rosato had seen enough, with the official end coming at the 2:08 mark.

Jacobs takes aim at Mora; Lamont Peterson looks ahead in Round 2 of PBC Jabs

In the second episode of PBC Jabs, host Jordan Hardy flashes back to last weekend’s PBC on NBCSN card, gets some quick hits from 160-pound world champion Daniel Jacobs before his title fight against Sergio Mora on Friday night, and catches up with former 140-pound titleholder Lamont Peterson.

Even after all the ups and downs, Mora's passion for boxing remains unwavering

Sergio Mora has experienced the exhilaration of winning a world championship, but he’s also been on the opposite end of that emotional spectrum during his 16-year professional career.

Daniel Jacobs’ professional career was cruising along in mid-2010, when he was 20-0 with 17 KOs and about to fight for his first world title. Then the harsh realities of life punched him square in the face.