Jarrett Hurd successfully defends his title for the first time against Austin Trout with a 10th round TKO victory.

Jarrett Hurd successfully defends his title for the first time against Austin Trout with a 10th round TKO victory. 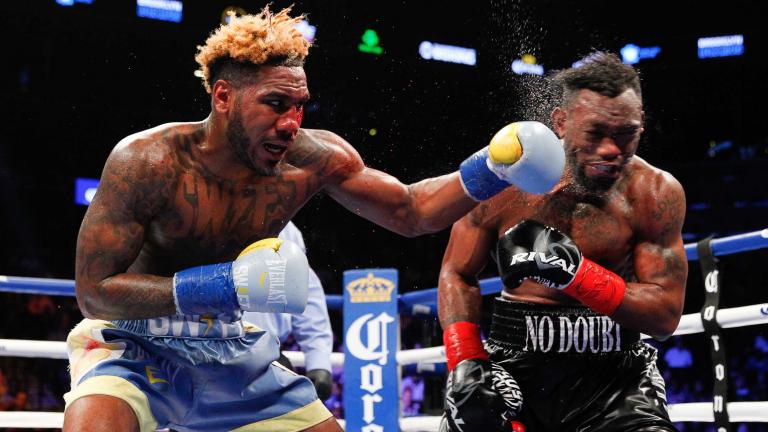 They couldn’t miss each other if they tried. It had the feel of a collision you would find in the mid-1950s on a Zenith black-and-white on an autumn Friday night watching the “Gillette Cavalcade of Sports.”

That’s the impact the Jarrett Hurd-Austin Trout fight had on those watching, and obviously the two participating for Hurd’s title. As an indication as to how close this fight was, Hurd landed 190 of 579 total punches (32%) to Trout’s 187 of 576 (32%), according to ShoStats. Neither fighter gave way.

Hurd, who at 27 years old, 6-foot-1 and 76½” reach, held all of the physical advantages over the 32-year-old Trout, who stood 5-9 and had a 72” reach. Trout had not won a fight in over two years. The scar tissue around both of his eyes was thought to be too thin. A whisper could open a cut there. At 32, his best thought to be behind him.

For 10 rounds, it would have been hard to convince anyone of that.

Trout, the former junior middleweight titlist, put on an incredibly valiant display. So much so that the Hurd-Trout fight may be a Fight of the Year candidate.

In the end, however, Trout (33-4, 17 KOs) couldn’t sustain the frenetic place of the younger Hurd. By the 10th, the corner of Trout, who had both eyes badly swollen, justifiably stopped it.