A construction worker by day, Joe Smith Jr. insisted he was ready to show the world “how good I really am” when he got in the ring with 175-pound contender Andrzej Fonfara.

He needed less than three minutes to do just that.

Smith (22-1, 18 KOs) used a ferocious right hand to knock Fonfara (28-4, 16 KOs) down barely a minute into the fight, then finished him off with a 14-punch flurry to secure the biggest victory of his career.

Fonfara, who has lived in Chicago since leaving his native Poland a decade ago, entered the fight as much as a 14-to-1 favorite. It made sense, considering he had won 18 of his previous 19 contests (the only blemish being a competitive loss to 175-pound champion Adonis Stevenson). He also had been undefeated in 14 previous bouts at the UIC Pavilion, while Smith had never faced an opponent of his caliber.

But with a large Polish contingent in the crowd cheering on their native son, it was Smith who came out and dictated the action, unleashing a double-handed attack as soon as the bell rang. Even when Fonfara threaded the middle and staggered him with an overhand right, Smith kept pressing the action.

The 26-year-old then found pay dirt when he landed a pinpoint right to the temple that immediately dropped Fonfara to the seat of his trunks. Fonfara beat the count, but Smith immediately resumed his attack, and as the round wound down, the underdog closed the show in impressive fashion.

Smith's decisive 14-punch assault began and ended with right hands to the jaw, the last once again depositing Fonfara on his backside. This time, as the 27-year-old crumpled against the turnbuckle, referee Hector Afu stepped in and waved an end to the fight at the 2:32 mark.

In stunning Fonfara on his home turf, Smith—who was fighting outside of New York for just the third time and the first since 2012—ran his winning streak to 16 in a row, with 12 of those wins coming by knockout. He also almost certainly cost Fonfara a lucrative rematch with Stevenson. 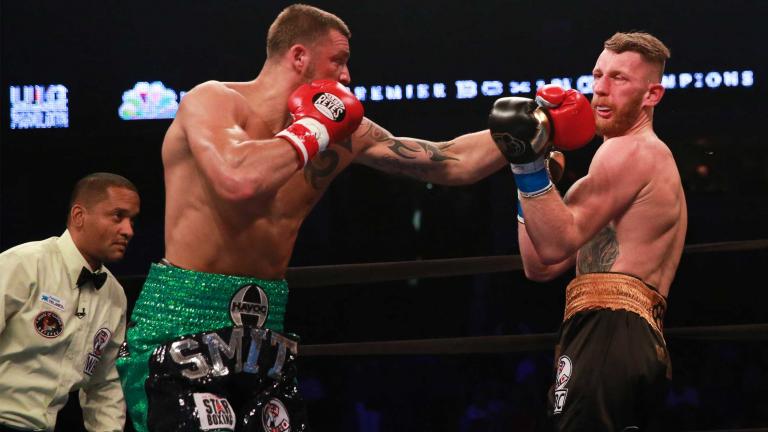 Celebrating the 12 Rounds of Christmas

Boxing fans are a loyal bunch, and that loyalty deserves to be rewarded with a holiday gift that keeps on giving.

Prior to Saturday night, Andrzej Fonfara appeared well on his way to a lucrative rematch with 175-pound champion Adonis Stevenson. All that stood in his way was Joe Smith Jr., a 26-year-old from Long Island, New York, who was a construction worker by day and had never set foot in a ring against anyone the caliber of Fonfara.