It was Miguel Flores’ first time headlining a televised fight card, and it most assuredly won’t be his last, as the 126-pound prospect thrilled with a savage, all-action victory over Mexican brawler Mario Briones.

Flores won a wide decision victory (98-92, 100-90 twice), but the scorecards don’t tell the whole tale of the fight: a grueling, blood-and-guts blast where both fighters ate plenty of shots and asked for seconds.

After Flores (19-0, 9 KOs) picked Briones apart in Round 1, working behind his jab and then smashing him with hooks to the body, he abandoned that approach in the following frame, standing and trading with his opponent as if to send a message: If it was a firefight that Briones wanted, Flores was here to give it to him.

Still, Briones (27-5-2, 20 KOs) took all the punishment and dished out plenty of his own, landing flush right hands in a blazing Round 5 where both fighters unleashed a fusillade of punches.

Although Briones’ right eye bled badly from Round 3 on, he refused to stop bringing the fight to Flores, who had never gone past eight rounds before, pressuring him into a dogfight and bludgeoning him in a particularly brutal Round 9.

But Flores’ more accurate punching (he landed 45 percent of his power shots compared to 36 percent for Briones, according to CompuBox), tireless work rate and rifling jab proved to be the difference as he pulled away for the win in entertaining fashion. 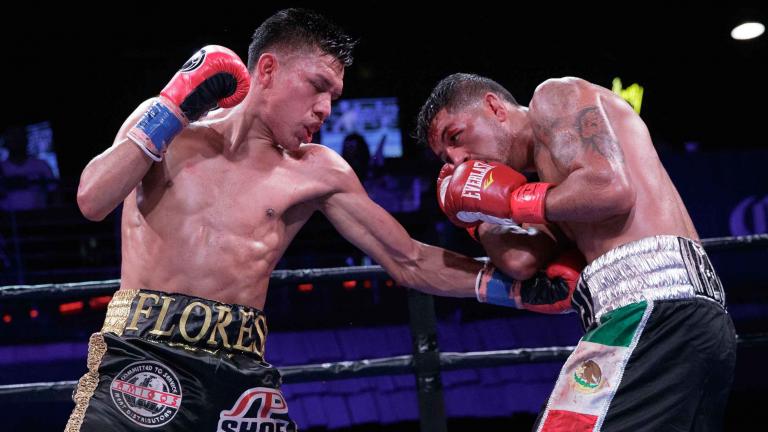 His words were as accurate as his punches. “We kicked off the year with a great brawl,” Miguel Flores said after his savage, all-action take down of Mexico’s Mario Briones, as the 2016 debut of Fox Sports 1’s "Toe-to-Toe Tuesdays" lived up to its name on this night.

The sky’s the limit: Miguel Flores looks to continue ascent up the 126-pound ranks against Mario Briones

Miguel Flores’ longtime adviser doesn’t mince words when it comes to his fighter, comparing him to a Mexican legend and predicting the unbeaten 23-year-old will challenge the 126-pound division’s best in short order.

Fighting for two: Whenever Miguel Flores enters the ring, his late brother’s spirit is never far away

When Miguel Flores made his professional boxing debut against Cody Gardner on August 14, 2009, he entered the ring feeling as if he had the strength of two men. It wouldn’t take long for Gardner to feel the full force of that strength.