With a 135-pound world title at stake, Robert Easter Jr. fought the final three minutes against Richard Commey as if everything was on the line. Turns out that was the case.

Easter rocked Commey with a knee-buckling right to the temple early in the 12th to take command of the final round and earn a razor-thin split decision.

Easter tried desperately to finish off his opponent before the final bell, but Commey gamely fought back to put the outcome in the judges’ hands.

It was a fantastic fight with several hard-to-score rounds throughout, and Commey’s stock likely increased even in defeat. The Ghana native pressed the action against the rangier Easter, who held a seven-inch reach advantage, and looked for angles on the inside.

Commey, 29, finally hit the sweet spot with a minute remaining in Round 8, stunning Easter with a lightning-quick short right hand and sending him stumbling. In the moment, Easter’s right glove appeared to touch the canvas as he stabilized himself, and referee Benjy Esteves Jr. ruled it a knockdown to give Commey a potential fight-changing 10-8 round.

Easter showed a bit of urgency after the knockdown in a wild Round 9, when the Toledo, Ohio, native snapped Commey’s head with a left hook before being buckled himself in the closing moments.

All of this built to a wild Round 12, which took place almost exclusively in one corner of the ring after Easter wobbled Commey in the opening moments with a huge right hand. Commey somehow kept his feet and held on momentarily while he regained his bearings, but then he resumed his attack as both fighters unloaded everything they had left until the final bell.

With the victory, Easter earned the world title vacated in June by Rances Barthelemy, who is stepping up in weight.

After the scores were read, the entire scene turned to a blur, with Easter collapsing to the canvas in tears before finding his mother and saluting the throngs from Toledo who traveled to see him stake his claim as the newest king of the 135-pound division. 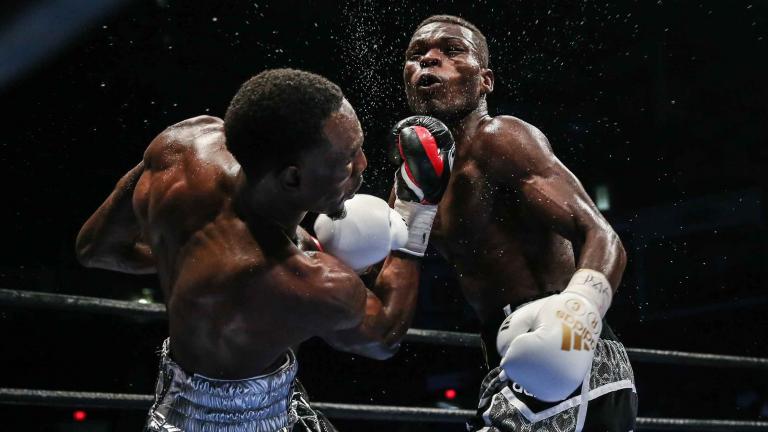 The paths of Robert Easter Jr. and Richard Commey are converging after originating in different parts of the world, but only one fighter will be able to continue on his way with an unblemished record and a world championship.

To prepare for his first shot at a world championship, Robert Easter Jr. brought everything back to where it all began.

Last summer, Daniel Jacobs and Sergio Mora gave fight fans two thrilling rounds of action, but the bout really didn't come to a natural resolution. Both men intend to settle that score in about a month.