Domonique Dolton and Oscar Molina went toe-to-toe for 10 rounds and fought to a majority draw.

Domonique Dolton and Oscar Molina both came into their fight at the Palms Casino Resort in Las Vegas undefeated, and they’re both going to leave that way. The 154-pound prospects showed plenty to like throughout the fight, but in the end it went 95-95 on two cards and a 97-93 edge for Dolton on the third, resulting in a majority draw.

A twitchy, deceptive Dolton looked to draw Molina in early and counterpunch, and he saw success with the tactic through the first half of the fight—except in the third, when Molina caught Dolton with a big right that staggered him.

Dolton was able to cover up on the ropes and weather the storm, though, turning in a strong back half of the round. It was, effectively, a microcosm of the fight as a whole.

That counterpunching strategy went out the window in the middle rounds as Molina started to time the counters well enough to evade Dolton's shots and come back with the second effort.

By the end, both fighters, exhausted, were hanging on each other and banging the body. Although it seemed like Molina might be pulling away in the middle rounds, Dalton proved the superior in-fighter and was more effective later on.

Overall, it was too close to call as a deadlock on two of the judges' scorecards resulted in the fight being a majority draw. 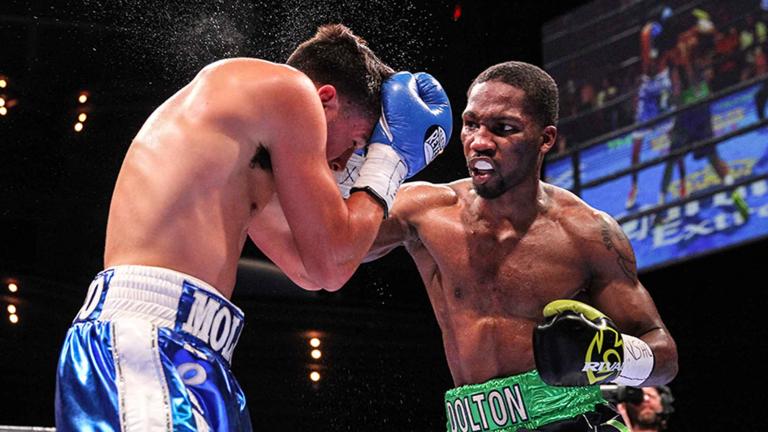 Domonique Dolton gets inside with a right hand against Oscar Molina during their 154-pound fight in Las Vegas. (Lucas Noonan/Premier Boxing Champions)

Javier Fortuna got to Carlos Velasquez early, and he without a doubt got to him late, as the 130-pound world champion from the Dominican Republic thoroughly outclassed his opponent in his first title defense in front of a rowdy Las Vegas crowd at the Palms Casino Resort on Tuesday night.

Domonique Dolton was so fixated on his professional debut against Derick Minton in April 2008 that he schlepped right past his tearful mother.

Domonique Dolton was a mystery to Keith Thurman entering their 152-pound clash in the opening round of the 2007 U.S. Olympic trials.