Sergiy Derevyanchenko remained unbeaten with a second-round TKO of ex-champion Sam Soliman in a 160-pound clash. 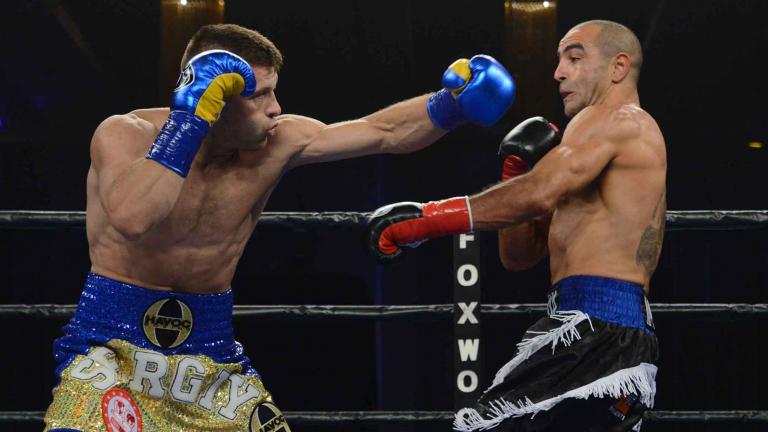 Nicknamed “The Technician,” Derevyanchenko was more like a demolitionist as he scored three knockdowns to gain a second-round TKO of former champion Sam Soliman in a title eliminator.

With his victory, Derevyanchenko became only the second man to stop the 42-year-old Soliman in a 19-year career, and the Russia-born Ukrainian and put himself in position for a mandatory shot at Golovkin.

Derevyanchenko, 30, dropped Soliman for the second time in the fight with a counter left hook to the temple with just over a minute left in the second round, then gained the stoppage after landing another cleaner, harder left hook to the chin of Soliman, whose back hit the canvas with a thud as he fell underneath the bottom rope.

Soliman tried to regain his feet, but he stumbled over as referee Johnny Callas waved an end to the bout at the 2:41 mark.

The start of the fight was delayed as both boxers had to get their hands rewrapped shortly before they were scheduled to make their way to the ring, causing late disruption to each fighter’s usual routine, but it didn’t take long for Derevyanchenko to heat up.

Soliman, who became a world champion at the age of 40 by defeating Felix Sturm in Germany in May 2014, suffered his third straight defeat. The Australian dropped a unanimous decision in a title defense against Jermain Taylor in October 2014 and then lost a split decision in June 2015 to then-unbeaten Dominic Wade, who subsequently lost to Golovkin in April.

Soliman hadn’t been stopped since Anthony Mundine scored a ninth-round TKO against him in a 168-pound title fight in March 2007.

The discrepancy in professional ring experience between Sergiy Derevyanchenko and Sam Soliman is exceptional heading into their 160-pound bout.

Sergiy Derevyanchenko certainly hasn’t shied away from facing veteran competition in his budding pro boxing career. Now the undefeated 160-pound prospect is set to test his skills against his most experienced opponent to date.