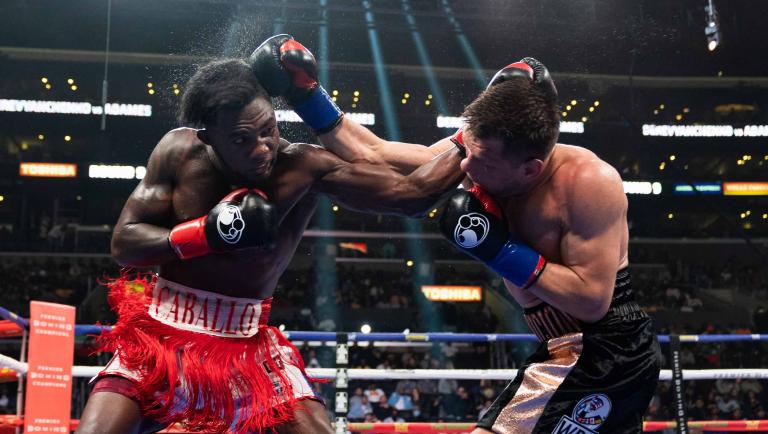 In a thrilling back and forth, Carlos Adames (21-1, 16 KOs) overcame a stiff challenge from former world title challenger Sergiy Derevyanchenko (13-4, 10 KOs) to win a 10-round majority decision in their WBC Middleweight World Title Eliminator.

Both combatants had their moments, but facing the toughest opponent of his career, the 27-year-old Adames shined. One judge scored the middleweight bout even at 95-95, while the other two scored it for Adames by scores of 96-94 and 97-93.

“This means a lot for me in my career and this is a big accomplishment winning against a fighter of his caliber,” said Adames, who was born in the Dominican Republic and fights out of Washington Heights in New York City.

"I am aggressive and speedy by nature, so I came in ready to do my thing. He started slow, wanting to see what would happen, and simply had the wrong game plan. He got a bit tired as the fight went on, took a lot of hard shots from me and it was evident that I caused him a lot of damage.”

Adames began the fight out of the southpaw stance, using his athleticism to land a nice left uppercut as Derevyanchenko dipped in and then an overhand left at a distance later in the round.

Adames controlled the action in the second, landing single shots from the outside. “The Technician” roared back toward the end of the round, straightening Adames up with a short right.

In the third, Adames switched to an orthodox stance and was equally effective, nullifying Derevyanchenko’s charges with a quick jab and well-timed counters. A right cross in the fourth staggered Derevyanchenko, but he bounced back to land in return as the crowd roared in appreciation.

“I expect my opponent to fight the same style. It was nothing special for me, just a quality fight,” said Derevyanchenko.

“He stayed southpaw, that was the difference in the fight. I don’t know what I’ll do next. I need a little bit of rest and then I will go back to the gym because I love boxing and I love the show.”

"This gives me an opportunity to move on,” said Adames. “I dominate at both 154 and 160, so wherever they give me the opportunity to fight for a championship is where I’ll go.”