In a battle of unbeaten 147-pounders, Terrel Williams knocked Prichard Colon down twice in the ninth round and won by disqualification when Colon didn't answer the bell for the 10th round.

Prichard Colon looked like he was ready to cruise to his 17th victory without a loss after five rounds against Terrel Williams in Fairfax, Virginia, on Saturday afternoon. And then what looked like a Sunday drive turned into a roller coaster. 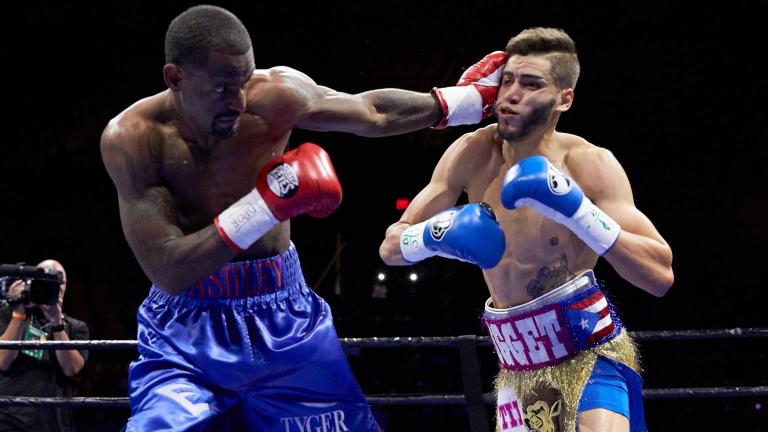 Terrel Williams connects with a left to the head of Prichard Colon during their 147-pound fight Saturday in Fairfax, Virginia. Williams won by disqualification. (Suzanne Teresa/Premier Boxing Champions)

Willaims (15-0, 12 KOs) started putting on the pressure in the fifth, and Colon (16-1, 13 KOs) responded with a vicious low blow that referee Joe Cooper ruled was intentional. Cooper deducted two points from Colon, but it definitely wasn’t the last time Cooper would be have a big say in what ended up being a bizarre fight.

After taking time to recover from the low blow, Williams took over the fight in the middle rounds as Colon grew tentative. But Williams gave that momentum back in the seventh round with a shot to the back of Colon’s head. Now it was Colon’s turn to take a break for being fouled—he took the full five minutes allowed—and it was Williams’ turn to get scolded by Cooper, who ordered a one-point deduction for the illegal punch.

The time off appeared to revitalize Colon, who rebounded with a solid eighth round. The ninth would tell a different story, though, as Williams scored a pair of knockdowns, the second with a crushing body blow that was followed by another shot that landed to the back of the head as Colon was falling.

After the round ended, Colon’s corner started taking off the fighter’s gloves, mistakenly believing the scheduled 10-round bout was over. The Virginia Athletic Commission directed Cooper to end the fight there, though, saying Colon was unable to answer the bell. Officially, the contest was ruled a disqualification.

Prichard Colon came into Saturday's fight against Terrel Williams at 16-0 with 13 knockouts, with 14 of those fights occurring in the last two years, and riding a wave of big-time prospect goodwill. Through four rounds, he was cruising, showing what all the buzz was about.