Late replacement Hector Garcia battered and dropped the highly-touted Chris Colbert on his way to earning a unanimous decision in a 12-round WBA Super Featherweight World Title Eliminator. 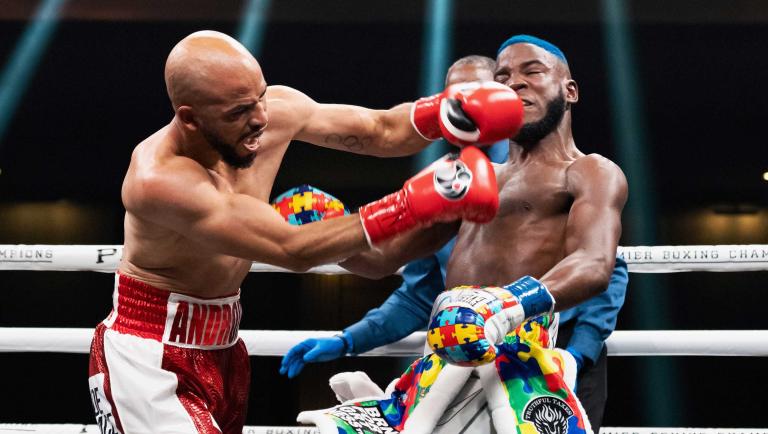 Late replacement Hector Garcia performed like the world champion he was substituting for on Saturday night, battering and dropping the highly touted Chris Colbert to earn a unanimous decision in a 12-round WBA Super Featherweight World Title Eliminator that headlined a thrilling tripleheader live on SHOWTIME in a Premier Boxing Champions event from The Chelsea inside The Cosmopolitan of Las Vegas.

Garcia (15-0, 10 KOs) stepped in for the WBA Super Featherweight World Champion Roger Gutierrez less than three weeks ago after Gutierrez was forced to withdraw due to a positive COVID-19 test. Despite having little time to prepare, the southpaw Garcia used his height and powerful left hand to dominate Colbert (16-1, 6 KOs) by scores of 118-109, 118-109, and 119-108.

“I have to thank everyone in my corner, Ismael Salas and Bob Santos, and everyone that worked with me,” said Garcia. “I feel great. I definitely knew three weeks ago that my life would change. My trainers gave me the confidence to win this fight.”

“I’m sorry I let everyone down, today he was the better man,” Colbert said afterward, his arm draped around Garcia in an encouraging embrace. “I take my losses like I take my wins. I want to run it back and hopefully we can do it again. There’s no excuses. He was the better man today.”

Garcia was the aggressor throughout, dropping Colbert for the first time in his career with a counter left in the seventh round that caused Colbert to fall backwards, his legs flying up in the air from the momentum. Colbert got to his feet, but Garcia jumped on him again, stalking him around the ring.

“In the ninth and 10th rounds I hit him so hard,” said Garcia. “I knew I had him. I knew he wasn’t going to be able to box anymore.”

Colbert could never get on track and showed little of the aggression and skills that made him one of the most talked about young fighters in the sport.

“Everyone puts pressure on me in the ring,” said Colbert. “That’s nothing new. I want to get a rematch if I can. Congratulations to Hector and his team. They deserved this win tonight. I wasn’t feeling myself. At the end the day, I’m still ‘Primetime’ on SHOWTIME.”

In the end it was Garcia, a 2016 Dominican Olympian, who performed like the favored fighter, punishing Colbert and pushing him back and potentially earning a title shot against Gutierrez.

“I want to fight Gutierrez for the world championship,” Garcia said. “I worked too hard to get into this position today.”