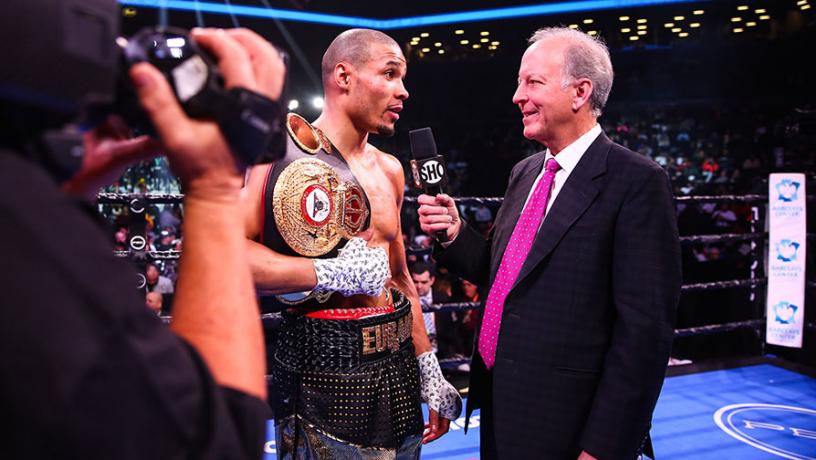 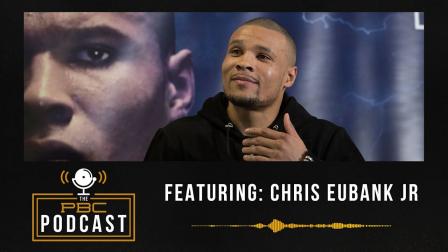 Chris Eubank Jr. is on a Mission | The PBC Podcast click here to get video transcript

The British boxing star has set his sights on the winner of the Charlo-Derevyanchenko showdown taking place Saturday, September 26 on SHOWTIME PPV.

This Week on The PBC Podcast: Chris Eubank Jr. is on a Mission

With the legendary Roy Jones Jr. in his corner, the interim WBA World Middleweight Champion is out to collect belts, particularly the one held by WBC titlist Jermall Charlo.

The Undefeated WBC World Middleweight Champion turns in a sterling performance, breaking down the gutty Hogan and flattening him with a single left hook in the seventh.

CHIP OFF THE OLD BLOCK

Being the son of a British boxing legend is no easy task. But that’s what super middleweight contender Chris Eubank Jr. has dealt with his entire life. His father, Chris Eubank Sr., is a former world champion with a unique style that endeared him to fellow Brits.

Chris Jr. wants to carve out his own legacy. He was born September 18, 1989 in the United Kingdom. Eubank began his brief amateur career in 2007. He won regional and state titles in the United States, finishing with a record of 24-2.

In all, Eubank won his first 18 bouts. His star power grew, thanks to a famous last name, and an eye-catching blend of speed, power and athleticism.

Eubank was resilient, dominating the second half of the bout and nearly pulling off the upset. However, it wasn’t enough. Saunders successfully defended his British, European and Commonwealth middleweight titles via 12-round split decision.

"It was a close fight,” Eubank said afterward. “He did what I thought he would do. He boxed to plan in the early rounds but then I thought I overtook him. But I'll be back."

Eubank bounced back in a major way. On February 28, 2015, he scored a twelfth-round stoppage of Dmitrii Chudinov to capture the interim WBA Middleweight World title. Eubank fought three more times at middleweight (all TKO wins) before moving up to super middleweight in February 2017 to face Renold Quinlan. Eubank was equally impressive at 168-pounds, notching a tenth-round TKO win.

In his next bout, on July 15, 2017, he took another step up in class, this time versus former world champion Arthur Abraham. Eubank was far too skilled for the rugged Abraham, winning a wide unanimous decision verdict.

The victory set up a semi-final showdown versus George Groves on February 17, 2018. Eubank would suffer his second defeat as Groves’ skill and experience led him to a unanimous decision win at Manchester Arena in Manchester, England.

On September 28, 2018, Eubank returned to the winner’s column, stopping JJ McDonagh in three. The victory set up a mega-showdown versus rival and former two-time world super middleweight champion, James DeGale.

The build-up to the camp featured plenty of trash talk from both sides, each hoping to earn British bragging rights in front of a raucous crowd at O2 Arena in London. But it was Eubank who would have the last laugh, proving to be too strong as he dropped DeGale once in the second and again in the tenth, en route to a clear unanimous decision win.

“This was the most important fight of my career, and I made a statement,” said Eubank. “I’m back where I’m supposed to be, at the top of the food chain. I’m coming for all the belts in the middleweight and super middleweight division. I’m fighting everyone they put in front of me.”

True to his word, Eubank moved down to middleweight for his next bout. On Saturday, December 7, 2019, he made his U.S. debut versus dangerous southpaw Matvey Korobov at Barclays Center in Brooklyn, New York. On the line was the interim WBA world middleweight title.

Unfortunately, the bout ended just as soon as things began heating up. Eubank won a second-round TKO when Korobov was forced to retire when he suffered an injury to his left shoulder after throwing a punch.

“I felt like I was about to get my swagger on,” said Eubank, who is now 29-2 (22 KOs). “He just turned around and stopped. I was going to go jump on him.  I guess something happened with his shoulder.”