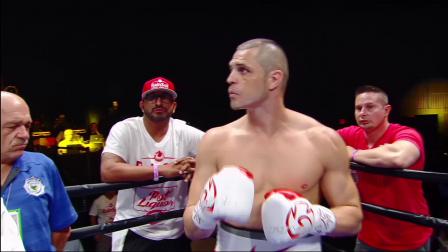 The tempo of the fight alternated over the first seven rounds Saturday night, although it seemed as if B.J. Flores was starting to assert himself.

Beibut Shumenov WINS against B.J. Flores by UD in Round 12 of 12

B.J. Flores is a dangerous man inside the ring—he came by the nickname “El Peligroso” honestly—who is in pursuit of a world championship at 200 pounds. However, the former college football player is also talented enough to compete in the heavyweight division.

All in the family

B.J. Flores proves that much like brown eyes and dimples, a taste for pugilism is the dominant genetic trait.

Flores’ father, Frank, was a boxer himself, and B.J. started going to the gym at 4 years old while his brothers were training under their father’s tutelage.

A taste for athletics set in, and by the time he was a senior in high school in Springfield, Missouri, Flores earned all-state honors in track and field and as a wide receiver in football.

The latter earned him notice in the ranks of major college football, and Flores accepted a scholarship to Brigham Young despite winning the National Golden Gloves at 178 pounds in 1997.

Man on a mission

After redshirting as a freshman at BYU, Flores went on a Mormon mission to Culiacan, Mexico.

While there, he trained at the gym where Julio César Chávez used to work out as a child and earned the nickname “Peligroso” for cleaning out the gym’s roster in sparring sessions.

After returning to the U.S., Flores took part in the Olympic trials in 2000 but lost in the semifinals. From there, he went back to football at Snow College in Utah, but the lure of boxing would prove too much.

Fighting throughout the country early in his career, Flores ran his record to 24-0-1 before taking on Danny Green in November 2010.

Green won a unanimous decision on his home turf in Australia to hand Flores the first loss of his career.

Undaunted, Flores returned to the ring eight months later to bounce back with a fifth-round stoppage of Nicholas Iannuzzi in Springfield, Missouri.

As he continued to climb the ranks in the 200-pound division, Flores began pulling double duty by 2012 working as a ringside analyst, and is now part of the PBC on NBC broadcast team.

Flores didn’t fight in 2013, but he made a strong return in 2014 with three victories, including a first-round KO of Adam Collins in May and a third-round stoppage of Kevin Engel in October.