Artur Beterbiev was dominant in his return from shoulder surgery and gained a fourth-round TKO of Ezequiel Maderna.

The Russian 175-pound contender floored Maderna twice in the third round, and followed up with two more in the following frame to gain a fourth-round TKO.

After establishing his jab over the first two rounds as he stalked Maderna around the ring, Beterbiev flashed his power toward the end of Round 3.

The Montreal-based Russian landed a right hand against Maderna, who was competing above 168 pounds for the first time since December 2010, and knocked the Argentine to the canvas late in the round.

Beterbiev, 31, then fired another short right that dropped Maderna, who spit out his mouthpiece after both knockdowns and had a point deducted by referee Marlon Wright.

It was more of the same in the fourth as Beterbiev floored Maderna in the opening seconds of the round. Maderna, 29, reluctantly got up, but was soon knocked down again.

This time, the Argentine sat on the canvas and looked at his corner, which threw in the towel as Wright ended the bout at the 0:56 mark of the round. 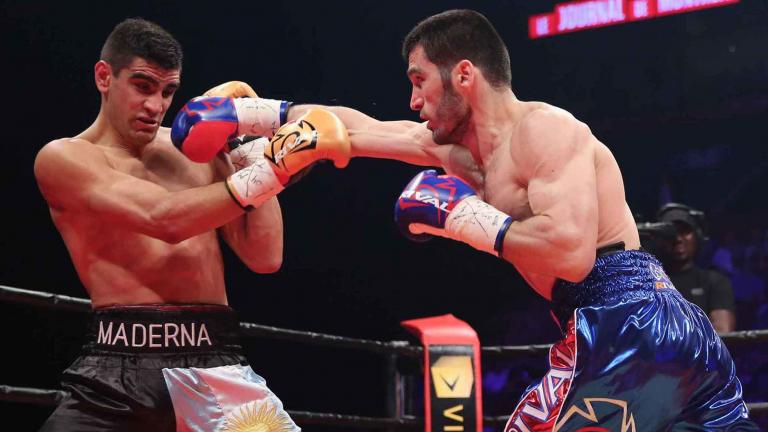 Artur Beterbiev proved to have too much power for Ezequiel Maderna as he gained a fourth-round TKO in Montreal. (Dave Nadkarni/Premier Boxing Champions)

Fully recovered from surgery on his right shoulder, Artur Beterbiev is now ready to test its knockout power against Ezequiel Maderna as he resumes his pursuit of a 175-pound world title.

Sergey Kovalev’s nickname might be “Krusher,” but Artur Beterbiev’s promoter refers to him as “The Target.”