Fast-rising David Benavidez capped a spectacular performance with an eighth-round KO of Rogelio Medina in their 168-pound title eliminator.

As predicted, David Benavidez did indeed face the toughest test of his young career in his 168-pound title eliminator against veteran slugger Rogelio “Porky” Medina. And Benavidez didn’t just pass his test, he aced it. 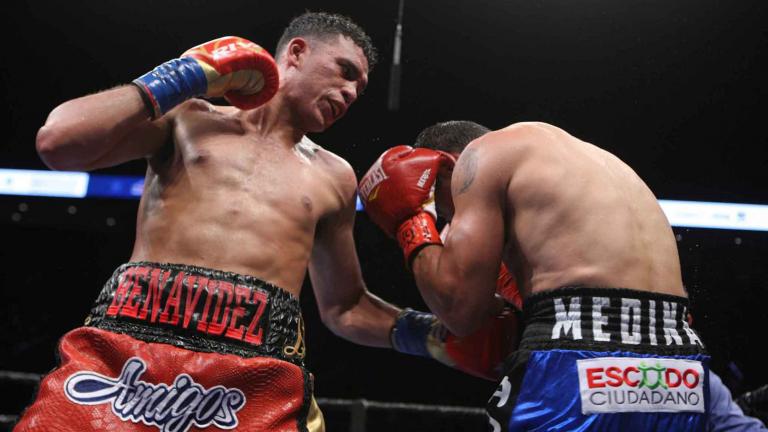 Benavidez drilled Medina with one vicious power punch after another, finally finishing things off in the eighth round with a sensational eight-punch combination that nearly knocked his hard-charging, iron-chinned opponent out of the ring in Laredo, Texas.

With the victory, the 20-year-old Benavidez earned his first world title shot. He’s now slated to face the winner of the upcoming bout between Anthony Dirrell and Callum Smith, who are scheduled to battle for the crown vacated earlier this year by Badou Jack. Depending on when Benavidez gets his crack at the Dirrell-Smith winner, the Phoenix resident could become the youngest active titleholder in boxing.

A knockout machine who had obliterated 16 of his first 17 foes—including 13 inside of two rounds—Benavidez walked into the ring having fought just 44 rounds in his nearly four-year pro career. By comparison, Medina had faced 44 opponents since turning pro almost 10 years ago.

So it was clear from the moment the fight was announced that Medina—a former 168-pound title challenger—would be Benavidez’s toughest challenge to date. Sure enough, the 28-year-old native of Mexico came out and took the fight to Benavidez, constantly applying pressure and frequently bullying his younger foe into the ropes.

While Benavidez absorbed some solid shots to both the head and body in the early going, he never panicked and in fact seemed quite comfortable fighting off his back foot, effectively using his jab and counterpunching skills. Still, after three rounds, it was Medina who held a slight lead on the scorecards.

It would prove to be a very short-lived advantage.

Midway through Round 4, Benavidez finally staggered Medina with a pinpoint left uppercut, then backed him up with a flurry of shots. Undaunted, Medina kept coming forward and firing. Even as Benavidez closed the round with another impressive onslaught of power punches, Medina flashed a smile and made a gesture, as if to say, “Bring it on!”

Benavidez obliged, resuming his assault in Round 5, yet the bull-like Medina never retreated. Then near the end of the sixth round, Benavidez finally tamed the bull. Spinning off the ropes, he landed a series of combinations that resulted in a ruled knockdown by referee Jon Schorle, even though Medina—who was bleeding from the nose—never left his feet.

That would change late in Round 7 when Benavidez connected with a devastating right uppercut to the chest that dropped Medina to his knees. Medina beat the count, but was doubled over on his stool in between rounds.

Refusing to quit, though, Medina not only answered the bell for Round 8, he came out throwing haymakers. But about a minute into the frame, Benavidez stood in the center of the ring and finished the show in Knockout of the Year style. It started with a crushing left-right to the body, followed by a brutal, head-swiveling six-punch combination that sent Medina crumbling to the canvas on his back and sliding under the bottom rope.

Schorle didn’t even bother to start a count, immediately waving an end to the bout at the 1:08 mark. That gave Benavidez his 10th consecutive knockout victory and sent Medina to his fourth career stoppage defeat.

PBC Jabs hits up Russell after his knockout showing, sets the table for Brook-Spence

This week in PBC Jabs, host Jordan Hardy recaps a pair of exciting fight cards, including a conversation with 126-pound champion Gary Russell Jr. after his world title-retaining TKO of Oscar Escandon, and looks ahead to Saturday’s 147-pound title showdown in England between British champion Kell Brook and unbeaten American Errol Spence Jr.

As predicted, David Benavidez did indeed face the toughest test of his young career Saturday night in his 168-pound title eliminator against veteran slugger Rogelio “Porky” Medina. And Benavidez didn’t just pass his test, he aced it.