Rances Barthelemy was dropped for the first time in his career in questionable fashion, but he didn’t let that knock him off course against Mickey Bey.

Barthelemy overcame a second-round knockdown that was actually caused by a headbutt and used his length and reach advantages to gain a split decision and retain his 135-pound world title.

After seemingly controlling the action in the second half of the bout, Barthelemy believed he had earned a unanimous decision.

But when the scores were read, the 29-year-old Cuba native had to sweat it out as he won for the first time by an outcome other than knockout or unanimous decision.

The switch-hitting Barthelemy came out aggressively from the opening bell and fought almost exclusively from the orthodox stance as he walked down Bey, who chose to counterpunch against the taller champion.

With less than 10 seconds left in the second round, Barthelemy fell to the canvas during an exchange and referee Sam Burgos ruled it a knockdown, although it was caused by an accident headbutt.

Bey helped sell it to Burgos, though, by throwing his hands up in celebration as Barthelemy went down.

Bey, 32, also was adversely affected by a clash of heads that caused bleeding over his left eye during the fourth round, but he fought effectively working behind his jab and countering Barthelemy.

Barthelemy outworked Bey down the stretch as the two-division world champion continued to hammer away at the body and use his length to control the distance.

Barthelemy retained the 135-pound title he earned in December by beating Denis Shafikov after Bey vacated the crown last June. 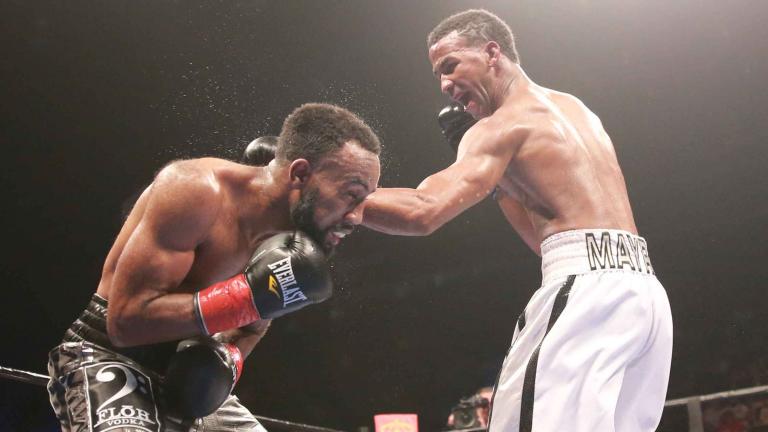 Rances Barthelemy was dropped for the first time in his career in questionable fashion, but he didn’t let that knock him off course against Mickey Bey.

Barthelemy expects experience, talent to carry him past Bey in 135-pound title fight

Rances Barthelemy claims he is more powerful and has faced better competition than Mickey Bey heading into their title fight.

As good as Rances Barthelemy was in winning a world championship at 130 pounds, he might be even better at 135.