The underdog proved to have plenty of bite, as Aron Martinez pulled off an upset of Devon Alexander in a rugged war of attrition.

From the get-go, Martinez attempted to make the fight ugly, plowing Alexander into the ropes, grappling and mugging, and leaning on the former two-division world champ in what seemed like an attempt to drain his energy and negate his hand-speed advantage.

Alexander was at best when fighting in the center of the ring, where he was able to turn Martinez and benefit from his faster fists to land shots and then get out of the way.

Martinez did his best to penetrate Alexander's defense through sheer relentless activity and began to succeed after some slowgoing early in the fight, when the action was measured.

By the middle rounds, Martinez was able to find his rhythm, landing uppercuts and refusing to allow Alexander to elude his charge.

Late in Round 8, Martinez snapped Alexander’s head back with a thundering right, wobbling the southpaw as Martinez unleashed a flurry of punches that appeared to have Alexander in trouble before the round came to an end.

Martinez continued to go for broke the remainder of the slow-simmering fight, which came to a boil late. It was Alexander who felt the burn as Martinez scored the upset in a unanimous decision. 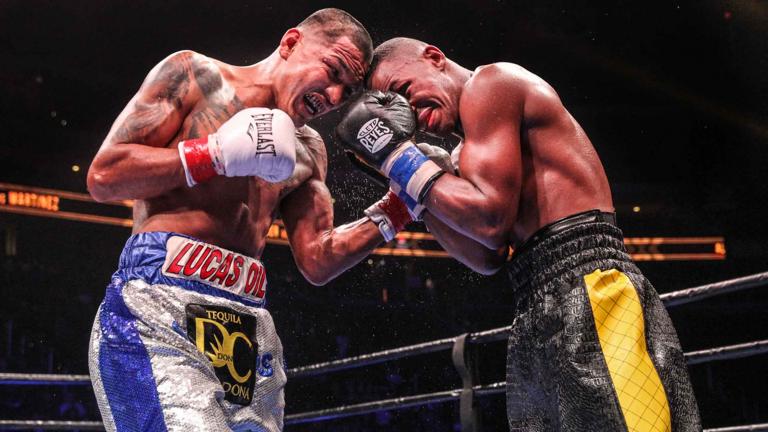 With a smile as big as his swollen left eye, Aron Martinez attempted to articulate what it feels like when a dark horse finds the light.

Devon Alexander got a preview of what to expect from Aron Martinez thanks to the Mexican-American’s disputed split-decision loss to Robert Guerrero in June.

Devon Alexander was confident of victory heading into last December's clash of former champions with Amir Khan. Unfortunately, the southpaw’s body wasn’t in sync with his mind, and Alexander lacked endurance in dropping a near-shutout unanimous decision.