After an exchange of knockdowns in the first round, Thomas Williams Jr. unleashed a flurry in the second to gain a TKO of Humberto Savigne in a 175-pound bout.

At first, it looked like Thomas Williams Jr. was going to cruise. Then it looked like the waters might be a little choppier than expected. Turns out you should put some stock in first impressions.

Williams (19-1, 13 KOs) put Humberto Savigne (12-3, 9 KOs) on his back about a minute into the contest at the Beau Rivage Resort & Casino in Biloxi, Mississippi.

But the hard-hitting southpaw was facing a fighter who had some pop of his own, and Savigne answered right back, connecting flush on a right hand that sent Williams reeling to the canvas. As the bell rang, it seemed like anybody’s fight.

That’s when Williams took over. He unleashed a right uppercut and left hook to open up a combination that again floored Savigne. This time the Cuban was clearly wobbly when he got up, but he gamely fired away, trying to punch his way back into the fight.

Williams had other ideas, unloading about a dozen shots with both hands, including several that landed flush to Savigne’s head, before referee Keith Hughes stepped in to wave it off at 1:48 of the second round. 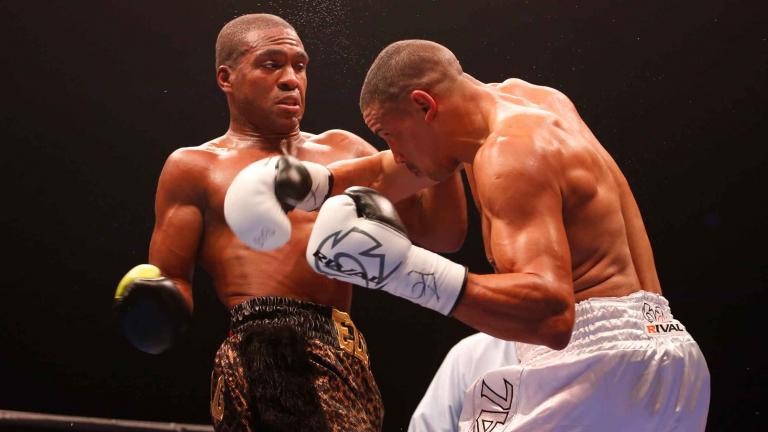 Thomas Williams Jr., left, quickly seized control of the fight in the second round to gain a stoppage of Humberto Savigne in Biloxi, MIssissippi. (Eli Baylis/Premier Boxing Champions)

Humberto Savigne came out Friday night with the kind of game plan that made it clear that the best defense is a good offense.

Of the 14 fights Humberto Savigne has logged as a pro, 11 have concluded before the final bell (including two losses). So one need not possess a Ph.D. to decode the Cuba native’s game plan heading into tonight's 175-pound battle with Thomas Williams Jr.