Felix Diaz entered the ring Saturday desperate to rebound from the first defeat of his career and end Sammy Vasquez Jr. undefeated run. Diaz accomplished his goal, although it took a little longer than the 10 scheduled rounds.

After seizing momentum in the middle rounds, Diaz (18-1, 8 KOs) battered and bloodied Vasquez (21-1, 15 KOs) down the stretch, then survived his fellow southpaw’s late charge to win a narrow unanimous decision in an entertaining battle of 147-pound contenders.

Initially, though, the fight was ruled a split draw. However, the scorecards failed to include a one-point deduction for Vasquez, who was penalized with less than 20 seconds remaining in the bout for letting his mouthpiece fall out for a third time.

Once the scorecards were recalculated, Diaz prevailed 95-94 twice and 96-93, bouncing back from a tough majority-decision loss to former 140-pound champion Lamont Peterson in October.

Although the final scores and punch stats indicated a close fight—Diaz had a slim 161-149 edge in total punches, including 120-90 in power shots—Vasquez’s face told a different story. From the middle rounds on, Vasquez bled profusely from a deep cut to the corner of his mouth, an injury that clearly impacted the 30-year-old’s ability to bite down to keep his mouthpiece intact.

Diaz also bloodied Vasquez’s nose in Round 8, and in Round 10, the Monessen, Pennsylvania, native spewed blood from the corner of his right eye after an accidental head-butt.

A U.S. Army National Guard veteran who did two tours of duty in Iraq, the 5-foot-10 Vasquez initially made the most of his five-inch height advantage, winning the first two rounds by pressing forward behind his jab and straight left as his smaller opponent looked to counter, mostly from the ropes.

Diaz, a 2008 Olympic gold medalist for his native Dominican Republic, finally found his timing and rhythm in the middle rounds, taking control of the fight in Round 5, when the 32-year-old began closing the distance behind a jab and straight left of his own. The shots frequently trapped Vasquez on the ropes, where Diaz ripped powerful uppercuts up the middle, as well as left crosses and right hooks around his opponent’s guard.

The action-packed final two rounds were more evenly contested, with Vasquez fighting out of one corner and twice cornering Diaz during a ninth-round toe-to-toe exchange. However, Vasquez’s late rally fell short, with the ultimate difference being referee Keith Hughes’ one-point deduction for the mouthpiece violation late in Round 10. 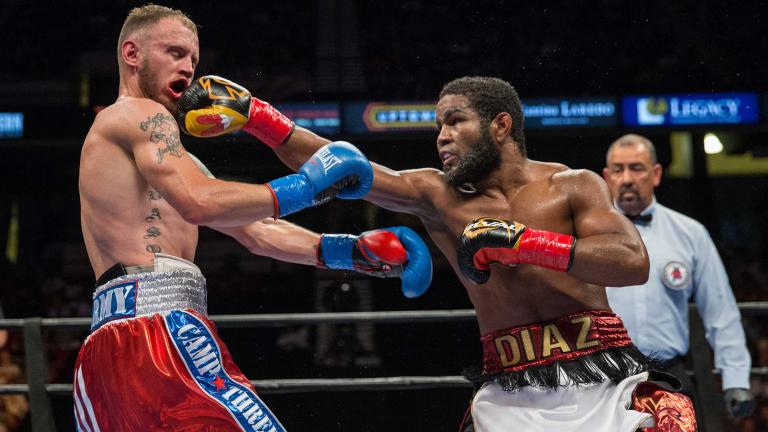 Felix Diaz entered the ring Saturday desperate to rebound from the first loss of his career and end Sammy Vasquez Jr.’s unbeaten run. Diaz accomplished his goal, although it took a little longer than the 10 scheduled rounds.

Sammy Vasquez Jr. has a game plan to gain a stoppage within eight rounds Saturday night, but Felix Diaz says he’s also “gunning for a knockout” in their 147-pound bout.

Not one to talk a big game, Diaz is quietly confident ahead of brawl with Vasquez

Like most successful boxers, Felix Diaz is short and quick with his punches. About the only thing shorter and quicker might be his responses to questions.