Adonis Stevenson has long claimed he has the most potent left hand in boxing. While a slew of fighters would no doubt argue otherwise, Thomas Williams Jr. certainly wouldn’t be one of them. 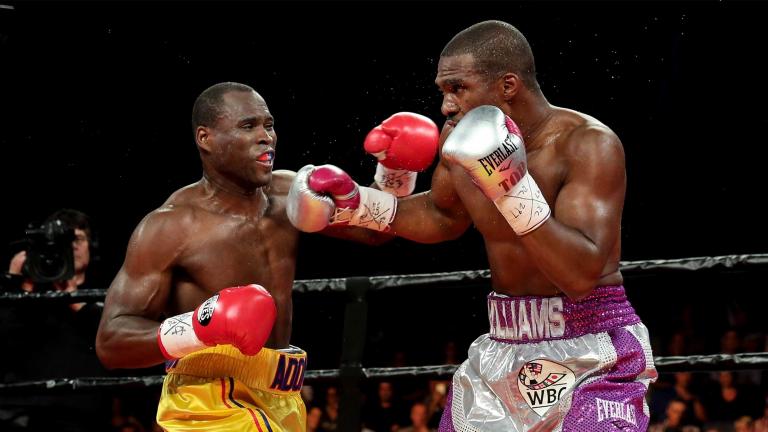 Making the seventh defense of his 175-pound title, Stevenson (28-1, 23 KOs) used his biggest weapon to knock Williams down late in the first round, then used it again to knock the challenger out cold late in the fourth.

The spectacular finish—a sure Knockout of the Year candidate—gave the man known as “Superman” his 15th consecutive victory, with 13 of those coming by knockout.

Despite being out of the ring for more than 10 months, Stevenson showed little rust, rocking Williams with his left hand on multiple occasions in the opening round. Williams (20-2, 14 KOs) stood up against the power until late in the stanza, when Stevenson came over the top with a looping left that cracked Williams on the side of the head, dropping the “Top Dog” to the canvas.

However, the Fort Washington, Maryland, native not only beat the count, but began flashing his own power early in the second round as both southpaws threw one big bomb after another.

The power display continued into Round 3 when both fighters had their moments, with Stevenson staggering his 28-year-old opponent with a big left uppercut, and Williams answering back with a left uppercut-right hook combination that appeared to hurt the champion before the bell.

Given how both fighters were unloading—and landing—vicious power shots, it seemed highly unlikely the bout would go the full 12 rounds. Turns out it didn’t even go another full three minutes.

After Williams took a brief respite because of a low blow early in Round 4, Stevenson stepped up the pressure, landing both punishing body shots and head-snapping uppercuts. Williams tried to counter with big blows of his own, but wasn’t nearly as accurate as he was in Round 2.

Then as the fourth was winding down and both men were standing toe-to-toe—as they did for much of the final three rounds—Williams began to fire a left uppercut. However, Stevenson beat him to the punch, unleashing a short left cross that connected flush on the jaw of Williams, who immediately dropped to both knees, then crashed face-first to the canvas.

This time, Williams was unable to make it to his feet, with the official ending coming at the 2:54 mark. With that, Stevenson ended Williams’ three-fight winning streak while securing his 16th stoppage in his last 18 victories dating to April 2008.

Presenting the 12 Rounds of Christmas: Round 4 (Stevenson vs Williams)

Adonis “Superman” Stevenson has often referred to his left hook as his moneymaker, and the 175-pound world champion hit the jackpot over the summer with that very punch.

Adonis Stevenson has long claimed he has the most potent left hand in boxing. While a slew of his colleagues would no doubt argue otherwise, Thomas Williams Jr. certainly wouldn’t be one of them.

Southpaws Stevenson, Williams set to slug it out in 175-pound title bout

Adonis Stevenson has held onto his 175-pound world title for more than three years, but Thomas Williams Jr. believes it’s time for the “Top Dog” to take down the champ.