Beibut Shumenov claimed a unanimous decision win in a fight where he switched up his fighting style and frustrated Flores.

It was a cat and mouse type of fight, where one fighter was defined by frustration and the other by his fleetness of foot.

B.J. Flores pressed the action all night against a kinetic Beibut Shumenov, who never stopped moving, much to the annoyance of Flores.

Shumenov bounced around the ring, picking his spots, firing punches judiciously, as Flores attempted to walk him down.

This is how the fight went much of the night: Flores marching down Shumenov, loading up on his punches and throwing bombs, while Shumenov relied on constant movement and counter punching.

Flores almost managed to turn the tide in Round 12, though.

With 10 seconds left to go in the fight, he landed a punishing right that sent Shumenov careening into the ropes. Flores didn’t have enough time, though, to take advantage of the opportunity to inflict more damage on a suddenly vulnerable Shumenov.

As such, it turned out to be too little too late as Shumenov won a unanimous decision (116-112 on all three judges’ scorecards). 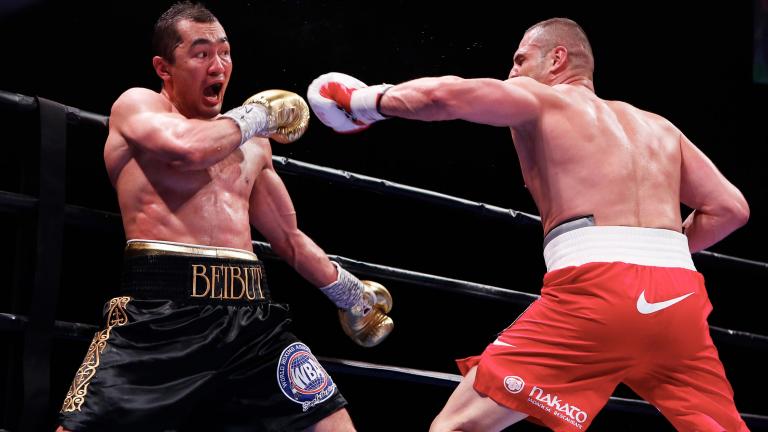 Despite a late surge by B.J. Flores in the final round, former world titleholder Beibut Shumenov claimed a win by unanimous decision in a fight where he switched up his fighting style and frustrated Flores. (Suzanne Teresa / Premier Boxing Champions)

License to ill: Beibut Shumenov fights himself sick in his Greatest Hits

Most fighters claim that they’re willing to leave it all in the ring, but for Beibut Shumenov, the contents of his stomach are occasionally included. This is the extent to which Shumenov is prepared to expend himself in his fights: He’ll battle on till he pushes himself past his physical limits. Be prepared for some grueling gut checks (literally) as Shumenov counts down his Greatest Hits.

B.J. Flores can break down your game, or just break you down

Suit and tie, side of the ring, firing off smart, insightful commentary like he’s firing off precision punches, it’s easy to settle in with B.J. Flores, the analyst, when you listen to him broadcast NBC fights.

Not-so-great expectations: Beibut Shumenov never thought he’d be a world champion—and then he became one

He had a law degree to fall back on, and that’s exactly what Beibut Shumenov expected to do when he turned pro: fall.