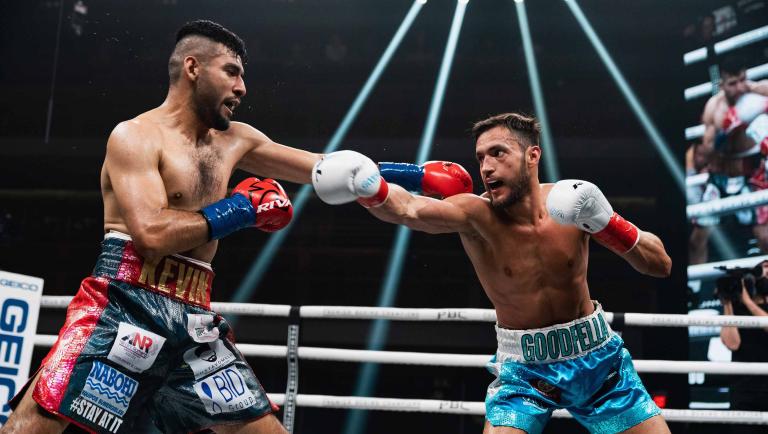 The tactical affair saw Perrella establish his jab from the outset, a punch he landed 64 times throughout the contest. Perrella, who is trained by Hall of Famer Roy Jones Jr., combined consistent movement with the jab, which slowed Salgado from putting together consistent offense.

“I thought my game plan and execution was great,” said Perrella. “I boxed smart. I broke him down. I’m not going to run from him. He was just winging big shots any time I would step in just trying to knock me out with one punch. I kept the jab in his face. Jabs to the body. Left hands. I hurt him. Everything was going great and it looked like I was sweeping all the rounds.”

For Salgado, he was able to keep the fight close with a consistent body attack, out landing Perrella 44 to 27 on body shots, in addition to a 37 to 34 edge in power punches. Perrella landed the most impactful fight of the punch, connecting on a sharp left uppercut that caused Salgado to stumble in round five.

All three judges agreed on only three of the ten rounds throughout the closely contested duel, eventually leading to the split-draw by scores of 97-93 for Perrella, 96-94 for Salgado and the 95-95 draw. After the fight, both men believed they had done enough to have their hand raised.

“I was shocked by the decision,” said Perrella, who fought to a draw against Tony Harrison in his last outing prior to Saturday night. “Two draws in a row. I put my all into this and I get robbed at the end of the day. It’s a tough pill to swallow. I easily out boxed him. He barely landed any punches. I don’t know what more I can do. I did my best. It is what it is.”

“I felt like I won,” said Salgado. “All Perrella did was run around and away from me. Maybe if I had pressured a bit more, that last judge would have leaned more in my favor. Perrella kept throwing his jab but almost never connected. I think that tonight was definitely a positive step in the right direction towards becoming the next Mexican star in the United States, and I look forward to pleasing the fans with more Mexican-style fights in the future.”