Gary Antuanne Russell passed the biggest test of his career with flying colors, stopping the former world champion Viktor Postol abruptly in the tenth and final round of their super lightweight bout. 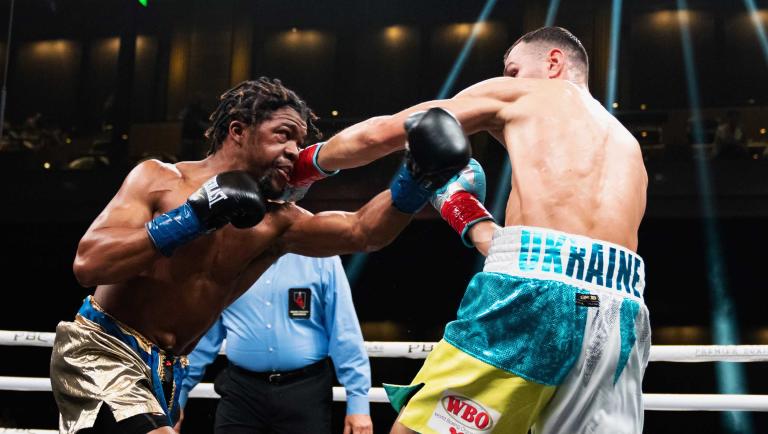 A former valedictorian of his high school, Gary Antuanne Russell (15-0, 15 KOs) passed the biggest test of his career with flying colors, stopping the former world champion Viktor Postol (31-4, 12 KOs) abruptly in the tenth and final round of their super lightweight bout in the SHOWTIME co-main event.

After pushing the action for most of the fight, Russell hurt Postol with a left uppercut in the tenth and followed up with a series of lefts and rights. With Postol against the ropes absorbing combinations, referee Mike Ortega intervened and waived it off at 2:31 of the tenth, much to Postol’s surprise, who shrugged his shoulders and seemed miffed at the stoppage. Russell kept his knockout streak alive while Postol dropped his second straight contest.

Russell was a 2016 U.S. Olympian who owned a 3-1 amateur record over current unbeaten welterweight Jaron Ennis, and he fought like one of the top contenders at 140 pounds on Saturday.

“The performance speaks for itself,” said Russell. “You see (Postol) went the distance with Terence Crawford, and I just stopped him. I believe I’m ready for another step-up fight.”

The two embraced in the ring when it was over, the respect between the fighters on full display. Postol fought on Saturday with his wife and their twin five-year old sons back home in Brovary, Ukraine in harm’s way with the Russian military invading the country.

And Russell did that repeatedly on Saturday. Gary Russell Jr., the former titleholder who lost his belt last month, manned the corner on Saturday with their father Gary Sr. relegated to ringside for health reasons, and he told his younger brother to “break the will” of Postol throughout the bout. Russell obliged, fighting aggressively and continuously pinning Postol against the ropes.

Postol had some success with his right hand and his jab, especially in the ninth when he landed a thudding right , but Russell showed a granite chin and countered effectively and in the tenth he landed crisp combinations, showcasing his hand speed, leading to the stoppage, the first time Postol had ever been stopped. Russell led on the scorecards at the time of the stoppage by scores of 89-82, 89-82 and 88-83.