Julio Ceja overcame an early knockdown and charged back to gain a fifth-round stoppage of Hugo Ruiz.

In a momentum swing sudden enough to cause whiplash, Julio Ceja turned the tables on Hugo Ruiz in spectacular fashion and gained a fifth-round knockout.

Ruiz was controlling the action early, using his superior length and much more accurate punching to tame the raging bull that was Ceja, who charged at Ruiz with abandon, swinging wildly and repeatedly getting countered by Ruiz in the process.

In Round 3, Ruiz dropped Ceja with a smashing left hook that sent Ceja crashing to the floor for a knockdown.

Undeterred, Ceja kept coming at Ruiz, absorbing his punishment. Then, in Round 5, Ceja crushed Ruiz with a massive left hand of his own, knocking him flat on his backside.

Ruiz beat the count only to take even more of a beating, getting hammered on the ropes by a wild-eyed Ceja until the referee stopped the fight, resulting in a KO victory for Ceja in a fight of the year candidate. 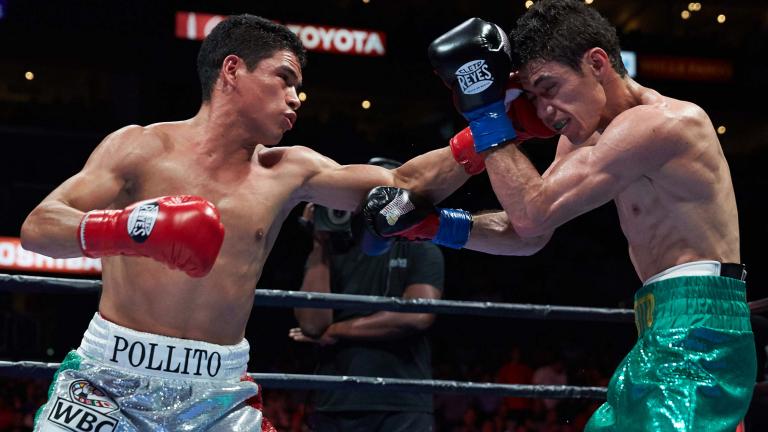 Ceja gained a KO victory over Ruiz in a fight of the year candidate. (Suzanne Teresa / Premier Boxing Champions)

In a momentum swing sudden enough to induce whiplash, Julio Ceja turned the tables on Hugo Ruiz in violent fashion—and then he broke a leg off of one of those metaphorical tables and hammered him into submission with it.