Caleb Plant didn’t get the knockout he was looking for against Juan De Angel, but he was no less dominant in his debut as a headliner. 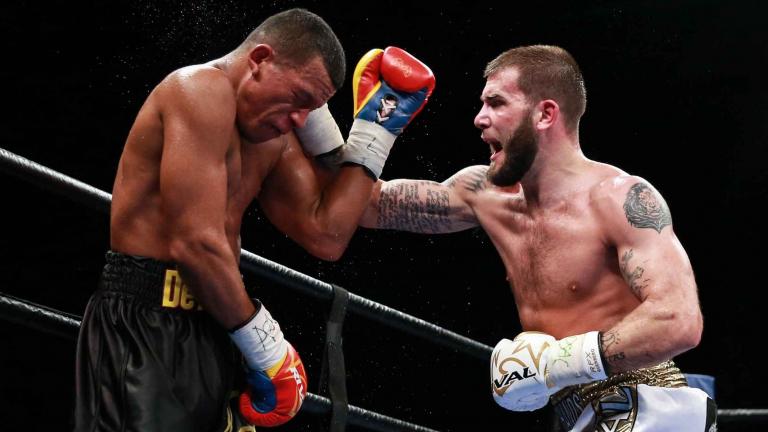 Although taken to the final bell in his first 10-round bout, Plant gained a clean sweep of the judges’ scorecards to earn a unanimous decision.

Plant floored De Angel in the fourth round with a left hook, highlighting a dominant performance in which the 168-pound prospect was never threatened.

The 24-year-old native of Ashland City, Tennessee, dictated the action from the outset, working largely behind his jab and using his footwork to continually frustrate De Angel, who was unable to find many openings.

Neither fighter was particularly aggressive or accurate, but Plant outlanded De Angel 120-57 in total punches according to CompuBox despite throwing 12 fewer blows (418-406).

The closest Plant came to any real danger was in the ninth round, when an accidental clash of heads left blood streaming from his forehead. Otherwise, he showed himself both the more powerful and more elusive boxer throughout the fight.

Caleb Plant didn’t get the knockout he was looking for against Juan De Angel, but he was no less dominant Tuesday night.

Some 15 months into his pro career, Caleb Plant was cruising along at 9-0 with eight knockouts, six of which came in the first round. Despite that dominance, though, the Ashland City, Tennessee, native had yet to truly show off his skills.

Through much adversity and a heartbreaking tragedy, Plant finds solace in the ring

Caleb Plant has survived frigid nights and blistering temperatures on an empty stomach and mourned the death of an infant daughter, yet has used boxing as a pathway to inner peace.