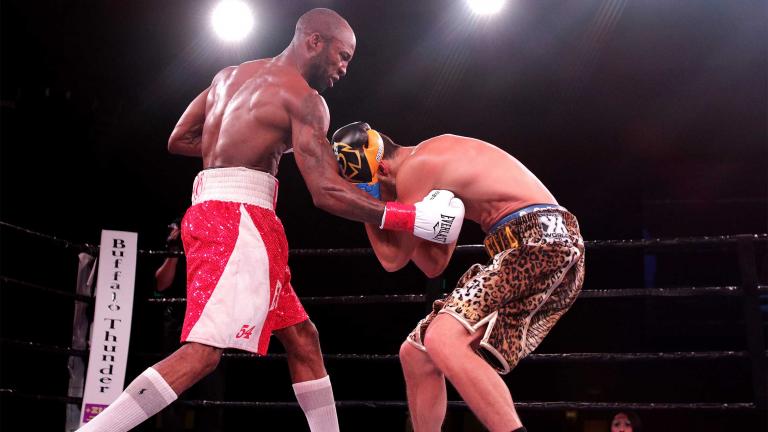 The former Cuban amateur star gained two knockdowns of Perrella as he powered his way to a fourth-round TKO in their 147-pound bout.

Ugas dedicated the fight to Fernandez, a 24-year-old compatriot who was killed two days earlier in a boating accident. The 2008 Olympic bronze medalist memorialized the Marlins ace in a handwritten tribute on his T-shirt and on his trunks.

Dominant almost from the opening bell, Ugas knocked Perrella down for the first time in his career with a straight counter right in the first minute of the fight.

It wouldn’t be the only time Ugas would use the right hand with devastating results against the 6-foot-1 Perrella. After softening up the “Goodfella” with body shots, Ugas put Perrella on the canvas with a crushing right to the head in Round 4.

Ugas quickly resumed his attack and drilled Perrella with a body shot that left the southpaw all but defenseless, allowing the Cuban to fire away uninterrupted until referee Rocky Burke ended the bout at the 2:20 mark.

It was the second straight defeat of an unbeaten prospect for the 30-year-old Ugas, an amateur world champion at age 19 whose career appears reborn following a two-year layoff.

After losing consecutive decisions in 2014, Ugas was out of the ring for 27 months before earning a 10-round unanimous decision in August over Jamal James, who was 20-0 entering the fight.

James was a replacement in that bout for Perrella, who bowed out just days earlier with an injured left thumb. The six-week delay didn’t seem to help the 27-year-old native of Fort Myers, Florida, who had stopped 11 straight opponents before being overwhelmed by Ugas.

The 5-foot-9 Ugas worked the body and head of his taller opponent with equal effectiveness. He connected on an overhand right in Round 2 that caused Perrella to put his glove to the side of his head, and stung the southpaw with another right just before the end of the third.

PBC Jabs explores boxing beefs, catches up with Quillin and serves up a knockout

Bryant Perrella carries a perfect record into his 147-pound clash with Yordenis Ugas. So did the last boxer to face the Cuban veteran, but it didn’t remain unblemished.