In his first title defense in October, Pedraza barely eked out a close split decision over Edner Cherry. But on Saturday night, the unbeaten 130-pound champ from Puerto Rico left no doubt. 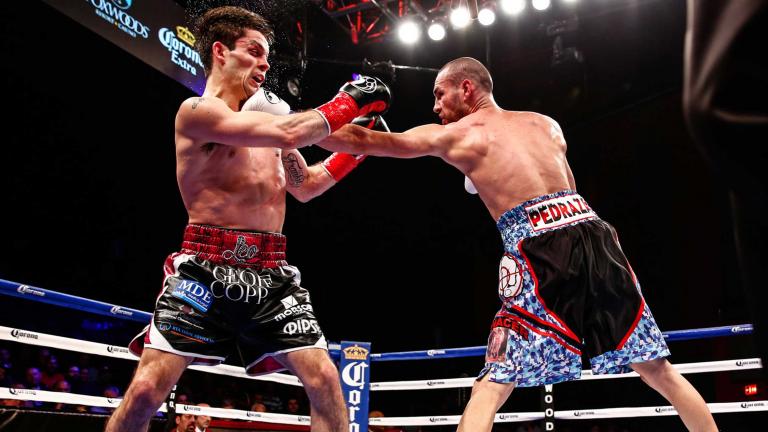 Thanks in part to a sensational ninth-round knockdown that proved the defining moment of the fight, Pedraza (22-0, 16 KOs) pulled away late to defeat British contender Stephen Smith (23-2, 13 KOs) by a margin much more comfortable than the Cherry bout.

The judges at Foxwoods Resort Casino in Mashantucket, Connecticut, scored it 117-110 and 116-112 twice in favor of Pedraza.

Despite the wide final tally, the fight was a dead heat through the first eight rounds, with each winning four stanzas on the unofficial scorecard of Showtime analyst Steve Farhood.

While Pedraza pushed the pace with a right hand that he threw from multiple positions, the 30-year-old Smith stayed in the fight with a powerful left hook that he was able to hammer to Pedraza’s body.

But the fight changed course in the ninth.

A short, looping right hand by Pedraza put the Liverpool, England, native on the canvas for just the second time in his career. Smith—who had won 11 straight bouts, including seven by stoppage since his lone defeat to current 126-pound world champion Lee Selby in September 2011—rose to beat the count, but never fully recovered the momentum he had established up to that point.

Unlike the majority of his contests where he switches stances throughout, Pedraza—who represented Puerto Rico in the 2008 Olympics—stayed orthodox against Smith and increased the pace and power of his punches to win the ninth through 11th round on all three judges’ scorecards.

While Smith—who is one of four brothers to hold British boxing titles—finished off strong in the 12th, it was too little, too late.

Gervonta Davis has heard all about how he’s never faced an opponent the caliber of 130-pound world champion Jose Pedraza. While he doesn’t necessarily disagree, he believes his own abilities are being sold short.

Jose Pedraza is trying to elevate his star status in Puerto Rico with a defense of his 130-pound world title. British challenger Stephen Smith is simply looking to keep up with his siblings.