Sometimes boxers need to absorb a hard fist to the face in order to wake up and start executing their game plan. Such seemed to be the case with Fabian Maidana on Saturday night. 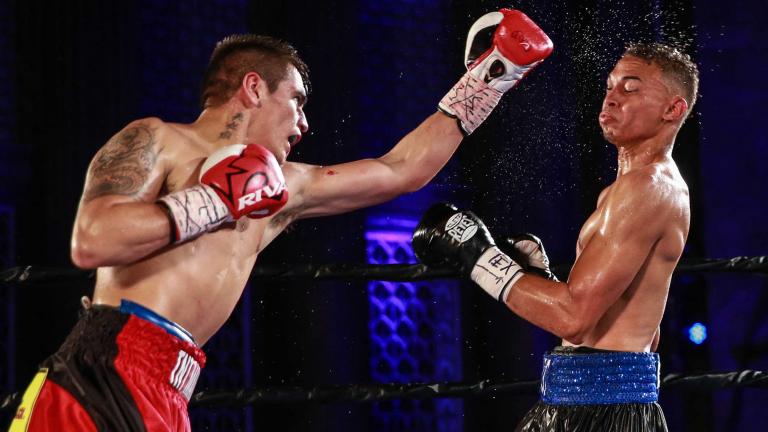 Fabian Maidana blasts Jorge Mayonet with an uppercut during their fight on Saturday. Maidana earned a seventh-round stoppage win to move to 10-0 (7 KOs) in his career. (Ryan Greene/Premier Boxing Champions)

Maidana plodded his way through the opening round of his eight-round main-event clash with Puerto Rican slugger Jorge Maysonet, generally taking the worst of it—including a hard right hand that bloodied his nose.

From that point on, though, the younger brother of former two-division champion Marcos Maidana took control and delivered a vintage double-fisted beatdown of Mayson, who failed to answer the bell for the seventh round.

Maysonet (13-2, 11 KOs) pressured from the outset, firing with effectiveness to the head and body. As the round was nearing its end, he nailed Maidana (10-0, 7 KOs) with a blood-spattering right hand to the nose that sent the undefeated native of Argentina into the ropes. Sensing urgency as blood streamed down his chest,

Maidana stormed back at the start of Round 2, rocking Maysonet with a right hand-left hook combination near the end of the stanza, during which he outlanded Maysonet 12-4 in power shots.

As the third round began, Maidana was on his toes and using versatility to befuddle Maysonet, who was stymied by head movement, stick-and-move tactics and a varied assortment of punches coming at him.

Maidana easily won the second and third rounds, then turned the fight completely in his favor in Round 4 by delivering an evenly distributed, double-fisted battering of his 26-year-old opponent over the final 20 seconds of the frame.

With his brother sitting ringside, Maidana was even more dominant in the one-sided fifth and sixth, doubling up on his hooks, firing straight rights and landing head-snapping shots. All the abuse took its toll on Maysonet, who offered little in return following his opening-round assault.

Acting on the advice of Maysonet’s corner, referee Rafael Ramos halted the fight before the start of Round 7, giving Maidana his seventh stoppage win in 10 career bouts.

It also gave the Maidana family their second big win in San Antonio, following Marcos Maidana’s two-knockdown, unanimous decision that dethroned then 147-pound champion Adrien Broner in December 2013 at the nearby Alamodome—arguably the biggest win of the elder Maidana’s career.

Sometimes boxers need to absorb a hard fist to the face in order to wake up and start executing their game plan. Such seemed to be the case with Fabian Maidana on Saturday night.

Refocused Fabian Maidana ready for toughest test yet against Maysonet

Fabian Maidana will headline a nationally televised fight card Saturday night, something his trainer never would’ve believed possible as recently as a year ago.

Fabian Maidana still has a long way to go to match the boxing accomplishments of his brother, Marcos Maidana, a former two-division world champion who twice took Floyd Mayweather Jr. to the limit. But the kid is at least headed in the right direction.